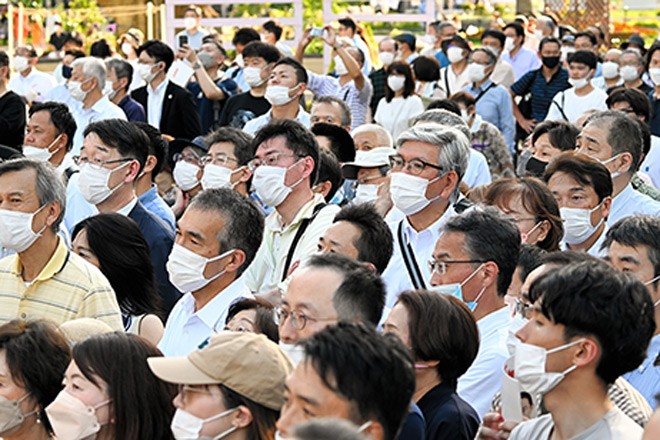 With a week to go before the Upper House election, political party leaders engaged in heated debate over the continuing rise in consumer prices, but many agreed on the need to raise minimum wages.

The heads of the nine ruling and opposition parties appeared in a debate program aired by Japan Broadcasting Corp. (NHK) on July 3, the last Sunday before voting day.

A number of issues face the nation, including the COVID-19 pandemic, Russia’s invasion of Ukraine, and security concerns in waters around Japan.

But the political debate focused primarily on rising prices that show no signs of relenting.

“The biggest point of contention is the high cost of living,” said Kenta Izumi, head of the main opposition Constitutional Democratic Party of Japan.

Izumi and others in the opposition camp said the government led by Prime Minister Fumio Kishida has failed to rein in the price increases.

The CDP president said the nation’s needs include a lowering of wheat prices. He also said his party will focus on policies to raise minimum wages and to enable “irregular” workers, such as those on part-time or temporary contracts, to shift to regular employee status.

Kishida, who is also president of the Liberal Democratic Party, said all possible measures are being taken to help the public deal with rising prices. He also urged voters to support the course taken by the ruling coalition parties.

“We have been promoting preferential treatment for companies that are proactively working on raising wages,” Kishida said. “We also aim to raise minimum wages to 1,000 yen ($7.40) or more.”

The government set up a task force on prices, wages and livelihood in late June. The task force is considering measures to reduce the burden on the public from higher prices for electricity, fuel and food.

Increasing minimum wage levels, which differ from prefecture to prefecture, was a common theme among the parties’ promises.

Kazuo Shii, leader of the Japanese Communist Party, and Mizuho Fukushima, chief of the Social Democratic Party, both called for raising minimum wages to at least 1,500 yen per hour.

Yuichiro Tamaki, leader of the Democratic Party for the People, said active investment in education would improve labor productivity.

The nine party leaders also discussed energy issues, which have been aggravated by Russia’s invasion of Ukraine.

Japan just experienced a record-setting heatwave that prompted the government to call on the public to conserve energy to prevent blackouts.

Izumi of the CDP again criticized the government.

“The sudden power crunch was caused by the government’s delay in taking action,” he said.

Tamaki from the DPP insisted the government should scrap the levy that is added to electricity bills to promote renewable energy generation.

Natsuo Yamaguchi, leader of junior coalition partner Komeito, said, “We should promote the use of hydrogen, ammonia and storage batteries because the current power-supply situation is insufficient.”

Kishida said his government has a plan in place to ensure a stable electricity supply.

“We will promote the resumption of nuclear power plant operations with safety being a prerequisite,” he said. “We will combine various energy resources to stabilize prices.”

Matsui from Nippon Ishin also showed a pro-nuclear power stance, saying: “The situation will be the same in winter. We should resume nuclear power generation.”

“Only through a political decision to immediately eliminate all nuclear power plants can we advance energy conservation, promote renewable energy and take a step forward to resolve the climate crisis,” Shii said.

A total of 125 Upper House seats are up for grabs on July 10, including one that will be determined in a by-election in Kanagawa Prefecture.