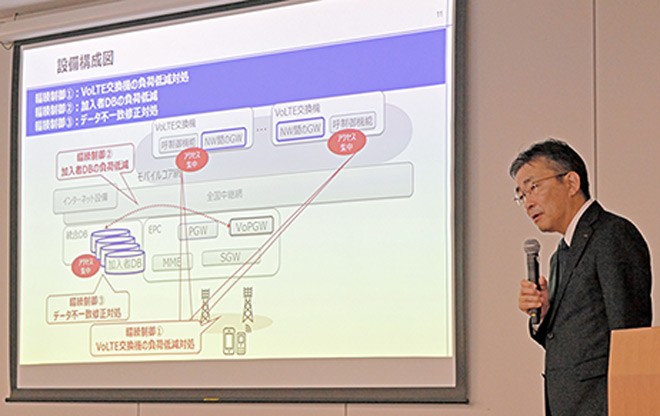 KDDI Corp. President Makoto Takahashi explains the cause of the communications glitch during a news conference in Tokyo on July 3. (Takayuki Kakuno)

More than two days after a large-scale network failure, many KDDI Corp. customers were still experiencing difficulties making phone calls as of the morning of July 4.

KDDI, one of the nation’s top three carriers, announced that it had largely restored its internet and data communications services across Japan as of 7 a.m. on July 4. But it remains unclear when the company will fully restore voice call services for its customers.

But the carrier has continued to restrict phone call traffic volumes as it incrementally resumes services and closely monitors the condition of its network.

The disruption started around 1:30 a.m. on July 2, according to company officials. The outage affected up to 39.15 million lines, including customers of its au mobile brand and low-cost UQ flanker brand, as well as users of Rakuten Mobile Inc. and mobile virtual network operators (MVNOs) that use KDDI’s lines.

It is one of the largest network failures ever to hit the nation, impacting a range of industries from the distribution of goods to banking.

The telecommunications ministry said it is a “serious incident” and suggested that it will consider issuing an administrative guidance to the company.

The network troubles were triggered by a glitch, which has yet to be identified, with the core router sorting data during maintenance work, according to KDDI.

That led to a failure in voice communications for about 15 minutes.

The company tried to fix the problem and restore services. But the switching system that converts voice calls into data was inundated around 2:30 a.m. as users tried to access the network to make calls, causing a country-wide network jam.

The disruption led to a chain of breakdowns, forcing KDDI to limit data traffic.