Regular flights from Narita to Hawaii resume on ‘Flying Honu’ 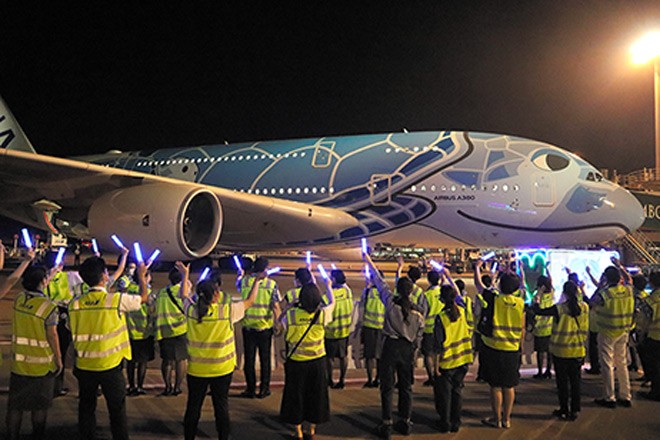 ANA group staff see off an Airbus A380 airplane, dubbed the Flying Honu, at Narita Airport as the aircraft resumes regular flights between Narita and Honolulu on July 1. (Yoshiko Aoyama)

NARITA, Chiba Prefecture--Newlyweds Mitsuhiro Tanaka and his wife, Sakurako, were finally off on their honeymoon to Hawaii to make memories.

“We’re glad we could get on the ‘Honu,’ which is really cute and evokes feelings of happiness,” the wife said on July 1 of the popular Airbus A380 plane painted to resemble a sea turtle, which is nicknamed the Flying Honu.

Sea turtles, considered sacred creatures in Hawaii, are known as “honu” in the local Hawaiian language.

All Nippon Airways Co. (ANA) resumed regular flights on the Flying Honu between Narita and Honolulu after a 28-month hiatus on the day, carrying 414 passengers eager to see the Hawaiian seas again.

The 520-seat aircraft left Narita Airport on the evening of July 1 to follow the route operated by ANA.

The couple are from Matsuyama, Ehime Prefecture. Tanaka, 28, proposed to Sakurako, 27, in Hawaii three years ago. They registered their marriage in November but chose not to leave on their honeymoon until COVID-19 cases began trending downward.

They said they are visiting Hawaii for eight days and seven nights and plan to have their wedding photos taken ahead of a ceremony.

“We’re looking forward to the photo shoot on a beach with Diamond Head in the background,” Sakurako said.

ANA suspended regular Flying Honu flight services in March 2020 following the spread of the pandemic. Apart from making two round trips between Narita and Honolulu in August 2021, the giant aircraft had since been used for domestic sightseeing flights or as a restaurant.

ANA will offer two weekly round trips on the route on Fridays and Saturdays using two of the three A380s it deploys.

“To me, the resumption of the (regular) Honu flight services symbolizes a return to normalcy in Japan,” said Osamu Furukawa, who served as the captain of the July 1 flight.

ANA group staff danced the hula during a ceremony held the same day before the flight’s takeoff to mark the resumption of regular flight services.

On July 1, ANA also increased weekly round-trip flights between Haneda and Honolulu from four to five and resumed its electric bus services between Waikiki and Ala Moana.

“Hawaii is a tourist destination that helps us gauge demand for other destinations,” said Shinichi Inoue, president and CEO of ANA. “We hope (the resumption of regular Flying Honu flights) will lead to a rebound in demand for travel.”

Zipair Tokyo Inc., a low-cost carrier under JAL’s wing, is offering three weekly round-trip flights between Narita and Honolulu and will operate them daily from July 16 to the end of August.

Singapore Airlines will also have two daily flights between Narita and Singapore starting July 26. Zipair Tokyo currently operates three weekly round-trip flights on the route but will add two more from July 16 to the end of August.

Airlines are planning to resume services or have more flights on other routes as well.

“Japan is imposing strict COVID-19 travel restrictions, such as visa applications and proof of negative test results taken before boarding a flight,” said Akihiko Tamura, president and CEO of Narita International Airport. “China, which sends the largest number of tourists to Japan, is imposing even tougher restrictions.”