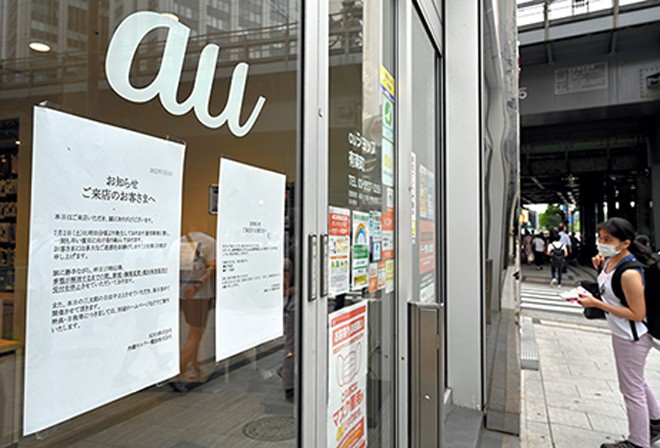 A poster displayed at an au shop in Tokyo’s Yurakucho district explains the communication glitch that affected service on July 3. (Takayuki Kakuno)

On a normal day, few people would pay much attention to the old pay phones, brightly colored as they are, that seamlessly blend into the ambience of Japan’s streets.

But on the first weekend of July, a system glitch that caused a network failure at KDDI Corp., one of Japan’s three major mobile carriers and a lifeline to many, sent people from all corners of society scrambling for alternative ways to contact one another.

Tomoyuki Nasu, 34, who works at a tour company in Okayama, found himself without means of communication in Osaka where he was on a day trip on July 3.

He received a message via the social messaging app Line from a tour conductor, asking him to “call back immediately.”

But Nasu was unable to make a call with his mobile phone because of the glitch.

It took about 15 minutes for him to find a pay phone at JR Osaka Station.

He could not even remember the last time he used a pay phone, he said.

“Now I have learned to appreciate pay phones,” he said.

A 19-year-old university student was waiting for his friend in Tokyo’s Shibuya district. They were supposed to go see a movie together.

Both use KDDI’s au mobile service and had gotten in touch with each other through Line before leaving home, where they had Wi-Fi.

He does not know his friend’s phone number. The idea of exchanging any contact information other than their Line accounts had never occurred to them, he said.

There was no way for them to check each other’s whereabouts. Even if he found a pay phone, it would not help.

The student said he was told by the friend to “not move” from the meeting place.

Waiting seemed to be a challenge for the young man.

“I can’t check social media,” he said. “There is little that I can do right now to occupy my time.”

“It makes me realize how much I normally play with a smartphone,” he said.

A 69-year-old man from Yokohama also appeared to be at a loss in Shibuya, walking and searching everywhere for the cafe where his friends were gathering.

He was unable to use the map function on his mobile phone or call his friends.

“I wonder if they are worried about me,” he said helplessly.

DIFFERENCE OF LIFE AND DEATH

Still, missing a movie or coffee with friends is a minor annoyance compared to what others faced.

Staff at Ito Oji-kamiya naika-geka clinic in Tokyo’s Kita Ward were desperate to find a hospital to transfer a patient with a heart disease who required immediate hospitalization.

They contacted five hospitals. All said no.

The hospitals said they had trouble contacting surgeons and were unable to operate on the patient.

The clinic ultimately found a hospital to send the patient to, but it could not promise an operation.

Hiromichi Ito, director of the clinic, said the KDDI glitch was “a hidden pitfall.”

“It is a life-threatening issue,” Ito said, urging the communication giant to “thoroughly take preventive steps.”

Ito said the clinic staff had difficulties keeping in touch with several COVID-19 patients who were recuperating at home on July 2 and 3.

Some of the patients who use KDDI’s au service could not log into HER-SYS, the health ministry’s information system on COVID-19 patients.

That prevented the clinic from sharing their health situation with a public health center.

“It took too long for (the system) to recover,” Ito said. “There are patients whose conditions are poor, and I am concerned.”

As a policy, the city’s public health center makes a routine morning call to COVID-19 patients.

But calls to au subscribers did not go through that morning.

The city kept extra staff on standby for immediate response in the event the condition of any of these patients deteriorated.

“Communicating with patients is essential for their recovery,” one frustrated staffer said.

“If you are concerned about your health, please use a different mobile phone career or use a landline to call a public health center,” the city government tweeted that evening.

A public health center in Naha, the capital city of Okinawa Prefecture, uses a text message service to inform COVID-19 patients in the morning of the day that their recuperation period is over.

On the mornings of July 2 and 3, however, the center was unable to send the texts to about 120 patients.

The center also reported about 185 cases on July 2 in which staff had trouble interviewing COVID-19 patients over the phone.

“Many patients must have felt uneasy because of the communication glitch,” a staff said. “We are also filled with frustration.”

According to the Metropolitan Police Department, police receive 5,500 to 6,500 emergency calls on a typical weekend day.

But on July 2 and 3, the number dropped about 10 percent, police said.

Fewer calls came in through the au service, while more calls were made from pay phones, police said.

Some of the calls were not really emergencies but rather complaints about the failure of the mobile network.

“I can’t pay the taxi fare with my au Pay,” a person said, referring to the smartphone payment service.

Another caller said, “I just wanted to see if I can call from my KDDI phone.”

But in Shimamaki, Hokkaido, two men, 43 and 52, needed emergency attention.

They were climbing Mount Kuromatsunai-dake, got lost on their way down the mountain and attempted to call for rescue at around 3 p.m. on July 3, according to Hokkaido prefectural police’s Suttsu Station.

But one of them uses the au service and could not make a call.

Luckily, they were able to call their friend through the Line app.

The friend then made an emergency call for them.

At around 7 p.m., a prefectural police helicopter rescued the two, who were not injured.

In Otsu, the capital of Shiga Prefecture, a 62-year-old man fell while hiking and likely suffered a broken foot on July 2, the city’s fire authorities said.

The man and his wife tried to make an emergency call, but they both use the au service.

Another hiker, a chance passer-by, called for them. They were later rescued by a prefectural helicopter.

‘RUN TO A FIRE STATION’

The Fire and Disaster Management Agency has urged the public on its Twitter account, “In case of an emergency, call 119 from a mobile phone using a different company’s service or from a landline.”

If neither is available, the agency has also recommended to “report it directly by running to a nearby fire station.”

A man in his 20s in Sendai, the capital of northeastern Miyagi Prefecture, did just that.

According to the city’s fire authorities, he rushed into a fire station in Sendai’s Miyagino Ward by himself at around 1:15 p.m. on July 2.

He said he felt ill and called for an ambulance but there was no connection.

He was sent to a hospital shortly thereafter, authorities said.

A man in his 70s in Sendai got sick and found himself in a similar situation. But he used a phone from his neighbor at around 9:40 p.m.

Both men were in stable condition, authorities said.