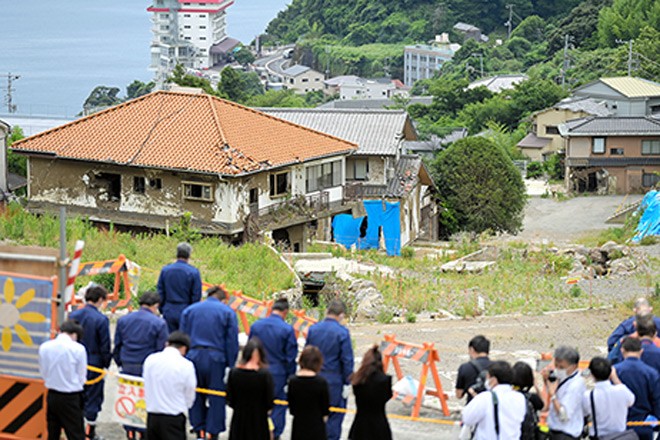 Firefighters observe a moment of silence to mark the first anniversary of the deadly landslide disaster in Atami, Shizuoka Prefecture, on July 3. (Kazushige Kobayashi)

ATAMI, Shizuoka Prefecture--Bereaved families and city officials on July 3 gathered to mark the first anniversary of the deadly landslide that tore through this coastal town without warning and mourn those who died and remain missing.

“The mudflow turned the comfortable everyday life upside down,” Atami Mayor Sakae Saito said at the ceremony held in the city’s Izusan district. “It will take time, but I will make a full effort toward recovery and reconstruction so that local people can live safely.”

Twenty-seven people died in the disaster and one other person remains unaccounted for.

At 10:28 a.m., the approximate time the disaster started, the wail of a siren went off for a minute.

Grieving families and local residents observed a moment of silence and prayer.

Hitoshi Suzuki, 57, who lost his mother, said, “I prayed, hoping that she is in a place free of suffering.”

Local residents came to offer incense at a makeshift altar set up near the site where the mudslide originated.

A 54-year-old woman in the district said, “Many people I know were affected by the disaster and have moved to temporary housing. We’ve gotten separated.”

A group of victims also revealed that day that it will file a lawsuit against the prefectural and city governments seeking damages at the end of August, stating that they are responsible for turning a blind eye to the illegal earth mounds, which is believed to be the cause of the disaster.

The group’s head, a 54-year-old man whose mother was killed in the landslide, said, “I cannot sit still thinking about the terror (she) felt until the moment the mudslide took her life.”

“We will hold the governments accountable and determine the cause,” he said.

(This article was written by Sokichi Kuroda and Eiichi Murano.)