Typhoon could land in Kyushu, with heavy rain bound for Kanto 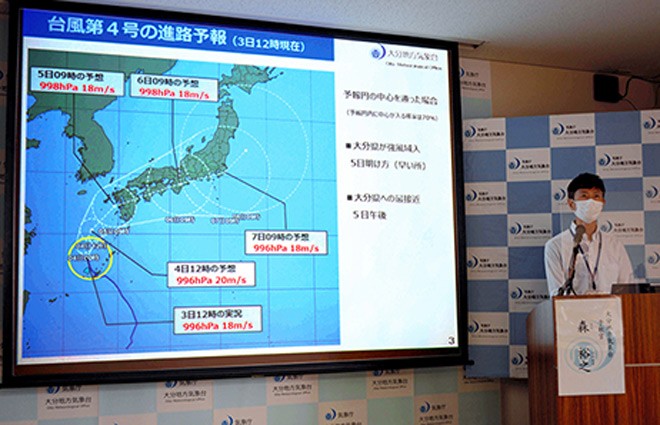 An official at the Oita Local Meteorological Observatory explains the direction of Typhoon No. 4 on July 3. (Masayuki Shiraishi)

Typhoon No. 4 could make landfall in the Kyushu region on July 5 after barreling northward above the East China Sea and changing its direction eastward, the Japan Meteorological Agency warned on July 4.

The agency is urging caution against possible disasters that could occur in western Japan through July 6, such as flooding in low-lying areas and mudslides.

Heavy rain could hit the Amami and Kyushu regions by July 5, and the Shikoku region by July 6, according to the agency.

Some areas from eastern to northern Japan are forecast to be hit with heavy rain because of warm, humid air blowing around the edge of a high-pressure system.

The agency has forecast up to 100 mm of rain during a 24-hour period through 6 a.m. on July 5 for the Tokai and Kanto-Koshin regions, 80 mm for Hokkaido and the Tohoku regions, and 60 mm for the Hokuriku region. It is calling on people in these areas as well to be prepared for mudslides and other disasters.

The warning came after Tokyo marked the ninth consecutive day of temperatures above 35 degrees on July 3, the longest on record.

This means the capital is likely to suffer from torrential rain due to the typhoon just after leaving the extremely hot weather behind.