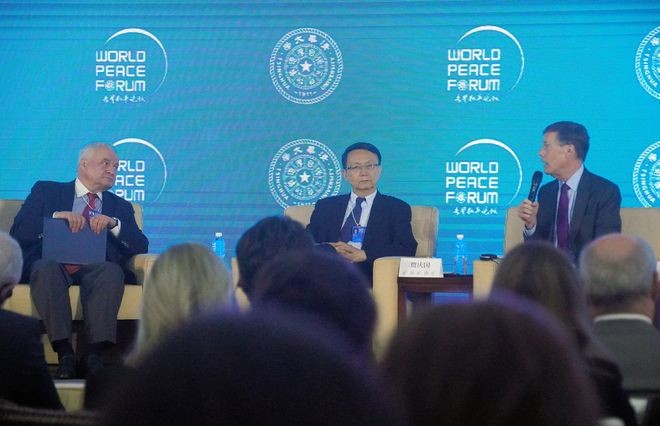 BEIJING--Western envoys in China criticized Russia on Monday for its invasion of Ukraine, with the U.S. ambassador saying China should not spread Russian "propaganda," during an unusual public forum in a country that has declined to condemn Moscow's attack.

"I hope foreign ministry spokespersons would also stop telling lies about American bioweapons labs, which do not exist in Ukraine," he said.

Burns was flanked by the British and French ambassadors to his left and a Chinese government adviser and the Russian ambassador to his right.

The organizer had billed the session as a discussion among representatives of the five permanent members of the U.N. Security Council, and the discussion was unusually pointed by the standards of public forums in China in recent years.

Criticism of Russia's conduct in Ukraine is largely absent from Chinese media and public discourse.

Russia calls its action in Ukraine a "special operation" to disarm Ukraine and protect it from fascists. Ukraine and the West say the fascist allegation is baseless and that the war is an unprovoked act of aggression.

While the session was on the broad topic of "The United Nations and Global Order," all three Western ambassadors criticized Russia for what they called its illegal aggression against Ukraine, a characterization rejected by Russian ambassador Andrey Denisov.

British ambassador Caroline Wilson told the in-person audience, made up of foreign diplomats, Chinese students and academics: "If Russia has its way, we would have global anarchy."

Western ambassadors also reserved some of their criticism for China. Wilson and Bili both rejected China's assertion that Europe's weapons aid to Ukraine was prolonging the war.

The United States and Western allies have also criticized Russia for spreading propaganda, disinformation and "nonsense" by alleging that parts of biological weapons were being made in Ukraine.

"It is the officials concerned on the U.S. side, not the Chinese side, who have been spreading false information and lies," Chinese foreign ministry spokesman Zhao Lijian said when asked during a daily briefing to respond on Burns' comments on Beijing repeating Russian propaganda.

The United Nations has said it was not aware of any biological weapons programmes in Ukraine.