VOX POPULI: Elections become personal if you choose your own issues to focus on 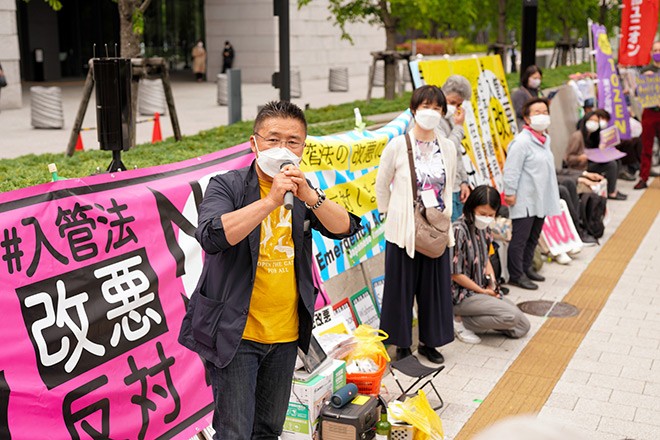 Ippei Torii, left, who heads the Solidarity Network with Migrants Japan, speaks against proposed revisions to the immigration control law outside the Diet in May 2021. (Asahi Shimbun file photo)

The expression “mai bumu” (my boom), which may translate as a “secret, personal fad,” has taken firm root in contemporary colloquial Japanese.

The word “boom” here is used in the sense of a popular trend, which is a social phenomenon. The incongruity of qualifying it with “my” struck me as refreshingly inventive when I first came across it.

Kudos to Jun Miura, an illustrator, who coined the expression.

During election campaigns, I hear some people using the expression “mai soten” (my election issue), although its use is probably limited.

Still, I believe an election becomes more personal in nature when we have our own standards of judgment.

In addition to highlighted issues such as rising prices and national security, the July 10 Upper House election may also be about the student-debt problem, whether to allow married couples to have different surnames and what to make of the nation’s immigration policy, among other issues.

On its official website, the Solidarity Network with Migrants Japan, a nonprofit organization, is presenting responses from political parties to its questions on the immigration system and the protection of refugees.

Sri Lankan citizen Wishma Sandamali died in March last year while being detained at an immigration facility. This could certainly be a major election issue.

Lest we become lost in the overwhelming flood of daily news, we would be wise to hold onto personal election issues.

During every election, I am reminded of the need to vote with a certain sense of resignation.

Still, we have no choice but to opt for the lesser of two evils, so to speak. To abstain is tantamount to letting other voters decide our future.

I recently heard a campaign speaker say from a street corner: “You may not give us a perfect score. All we ask for is your passive support, nothing more.”

It was blatantly honest, to be sure, but the speaker certainly wasn’t wrong.