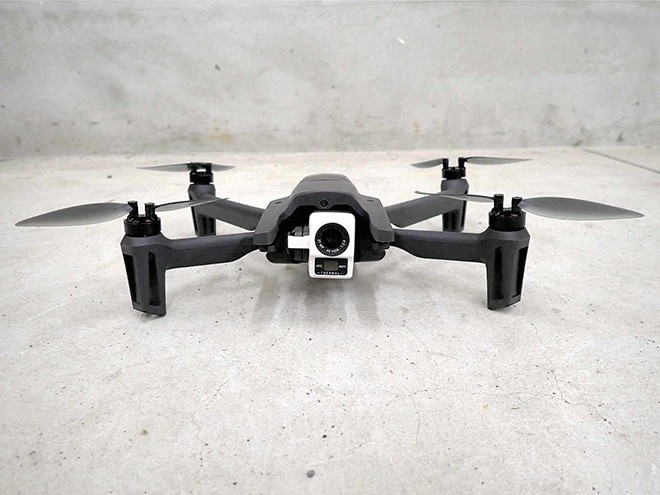 A meeting of the Liberal Democratic Party in June saw this photo of the type of drone that Japan has provided to Ukraine. (Provided by the Defense Ministry)

Drones donated to Ukraine were described as “nonlethal,” civilian-use machines that do not violate Japan’s three principles against providing weapons to a nation in conflict.

But the specific features of the drones were shown at a June 14 meeting of the ruling Liberal Democratic Party, where government officials provided a briefing on Japan’s assistance to Ukraine.

The high-performance functions of the aircraft have fueled concerns among defense experts that the drones could be deployed as “weapons” for attacks against Russian troops.

The drones can detect people in hiding or possibly altered to carry bombs and other weaponry, they said.

Japan’s three principles on the overseas transfer of defense equipment and technology prohibits the provision of weapons to a nation involved in conflict.

Although Japan offered the drones on the belief that Ukraine would use them for nonaggressive purposes, one expert said the Japanese government should have assumed the drones would be deployed in the war to repel the Russian invaders.

“Drones are extremely close to weapons if they are used to identify targets for shelling,” said Yoshitomo Aoki, an aviation and defense analyst.

He said Ukrainian forces have already cited the use of a drone in a strike against a Russian naval vessel, so it is natural to assume they are using the Japanese donations for similar purposes.

Documents presented at the LDP session included a photo of the drone, which multiple dealers identified as the Anafi Thermal produced by Parrot, a French manufacturer.

An official close to the ministry confirmed that the drones Japan transferred to Ukraine included the same type shown in the photo.

The particular model dates back several years, according to the dealers.

It weighs 315 grams, measures several centimeters to tens of centimeters square, and carries a price ranging from more than 100,000 yen ($735) to hundreds of thousands of yen.

The Anafi Thermal can fly for about 25 minutes and travel up to 4.5 kilometers.

The most prominent feature of the drone is its ability to detect heat, according to the dealers.

Fitted with an infrared sensor, the Anafi Thermal can measure temperatures from minus 10 degrees to 400 degrees through the use of thermal reflection.

Differences in the temperatures gauged are shown on the operator’s smartphone in different colors. The data can be saved as images and footage.

The Anafi Thermal drone is believed to have been used mainly by research institutes and construction companies to measure surface temperatures of structures.

A YouTube video shows that the Parrot-produced drone can be applied in many areas, such as measuring temperatures of lava overflowing from a volcano, searching for injured people who may be unable to move, and observing wild animals.

The dealers said the Anafi Thermal model would also be adept at locating people, such as troops, hiding in the grass.

The Self-Defense Forces have used the drone to find people trapped under rubble in natural disasters.

One SDF member well versed in drone operations said the versatile model is easy to operate and can travel at 50 kph.

“It is particularly good at horizontal movements as well as hovering midair at specific locations for surveillance,” the SDF member said. “The images it takes are of high quality, as good as those from the latest TV model.”

The Defense Ministry had initially declined to reveal such details about the drone model.

It was among a series of supplies sent to Ukraine since March, including bullet proof vests, helmets, emergency rations, medical and hygiene kits, binoculars, cameras and cold weather gear.

In April, when the government announced the transfer of the drones to Ukraine, it asserted that they are not considered defense equipment and thus not subject to the principles restricting weapons exports.

“They are small, consumer drones used for civilian purposes,” Manabu Mannami, chief of the Department of Equipment Policy of the Acquisition, Technology & Logistics Agency of the Defense Ministry, said at a May 17 session of the Upper House’s Foreign Affairs and Defense Committee.

The government also described its aid to Ukraine as “nonlethal.”

An official close to the Defense Ministry confirmed that Japan had sent about 30 drones, including some of the Anafi Thermal model, to Ukraine between May and June by commercial aircraft.

The drones had been in the possession of the SDF, the Acquisition, Technology & Logistics Agency and the National Defense Academy.

The Ukrainian Embassy in Tokyo told Japanese officials that the European country would use the drones to “make assessments of the situation.”

Drones, however, can be altered for more aggressive purposes.

In April 2015, a lightweight drone fitted with a plastic bag containing radioactive liquid was found on the rooftop of the prime minister’s office building in Tokyo.

A man arrested by Tokyo police in connection with the case was an opponent of nuclear energy and had written in his blog that he would not hesitate to commit terrorism to prevent the restart of nuclear plants.

The drone found was made by DJI Technology Co., a Chinese manufacturing giant.

Aoki, the defense analyst, said drones similar in size to the Chinese model have been used to identify targets in the war in Ukraine.

Some were fitted with bombs, instead of surveillance cameras, to attack ground locations, he added.

Even if the drones are unable to carry heavy payloads, they can still be deployed to release chemical agents, he said.

Many ministry officials are optimistic that Ukraine will not use the drones as weapons.

“Drones would turn into weapons if they are launched with explosives with the aim of slamming into targets,” one ministry official said. “But that scenario is the least likely.”

A warning from defense analysts about the possible deployment of drones by the Ukrainian military was “unexpected,” according to a senior ministry official.

But some other ministry officials have questioned the wisdom of offering the aircraft in the combat zone.

“Of all the aid that Japan has sent to Ukraine, the drones have the most potential to be used for attacks,” according to one of the officials.

The LDP is advocating a lifting of restrictions on overseas transfers of defense equipment.

In April, the party submitted to the government a report that called for a review of the existing setup to allow a wide range of equipment to be sent to a country that is the victim of aggression.

Based on the proposal, the government has been weighing the option of overhauling the system to allow transfers of equipment of deadly force.