KDDI apologizes for outage while ministry vows to investigate 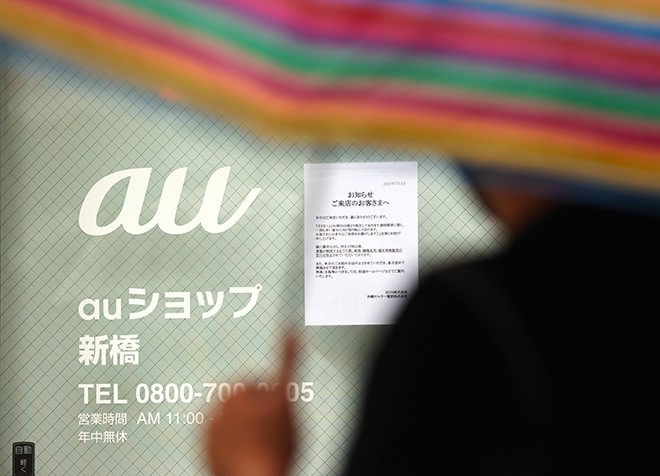 An apology note is posted on an au shop in Tokyo’s Minato Ward on July 4. (Naoko Kawamura)

Major telecommunications operator KDDI Corp. reported that its massive network failure had been fully fixed at around 3:30 p.m. on July 5.

It took more than 80 hours for the company, one of the nation's top three carriers, to bring the network back to a full restoration.

During a news conference held on July 4, Kazuyuki Yoshimura, a top company official, apologized, saying that the trouble “has caused a great deal of inconvenience for a lengthy period.”

Yoshimura said the company “has been aware that it is a major accident,” and has pledged to find the cause and take preventive steps.

He said the company “continues to consider” compensation but declined to go into details.

Customers of its au mobile brand and budget UQ flanker brand, as well as users of Rakuten Mobile Inc. and mobile virtual network operators (MVNOs) that use KDDI’s lines, were affected by the system failure.

The company said the trouble has affected up to 39.15 million phone lines.

A glitch during network equipment maintenance appeared to have caused the trouble, the company said.

KDDI at one point said the work to restore the network had finished by 5:30 p.m. on July 3. But it continued to throttle traffic volumes.

At 4 p.m. on July 4, the company said the trouble “has been pretty much fixed.”

Yasushi Kaneko, the communications minister, said at a news conference on July 5 that the ministry will examine the company’s handling of the trouble because it did not adequately provide information after the accident.

Kaneko said the company “did not fully carry out its responsibility as a carrier.”

A panel of outside experts will be summoned to examine the matter immediately, he said.

Kaneko said the company “had the leeway to be creative and do more to eliminate the uncertainties held by customers” through how it informed its customers, what it told them and how often it provided updates.

“It was extremely regrettable that the (trouble) caused possible life-threatening consequences,” Kaneko said.

For example, some people had difficulties placing emergency calls.

This is not the first time in recent years that a major network faltered. NTT Docomo Inc. experienced a large-scale system outage in October 2021.

Kaneko said KDDI “failed to learn the lessons of” the NTT failure and the ministry will discuss preventive steps.

The ministry considers the KDDI trouble to constitute a “serious accident” under the Telecommunications Business Law.

It is expected to slap the carrier with an administrative directive.

(This article was compiled from reports by Ayumi Sugiyama and Yoshikatsu Nakajima.)