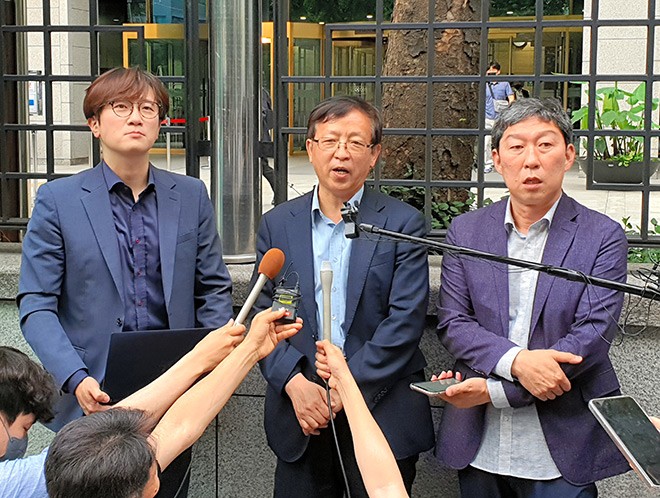 Lawyers for Korean wartime laborers speak with reporters on July 4 after the first session of a South Korean government-sponsored conference to resolve the compensation issue. (Takuya Suzuki)

SEOUL--A South Korean government initiative seeking to resolve the thorny issue of wartime Korean laborers seeking compensation from Japanese companies got under way on July 4 at the first session of a conference here.

At the meeting, the lawyers for the wartime laborers again stressed that the only way to settle the dispute is for the Japanese government and companies to fulfill their responsibility and called for direct talks between the plaintiffs and company officials.

The issue, along with lawsuits by former “comfort women” demanding compensation from the Japanese government, have driven Japan-South Korea relations to their lowest level after World War II.

But there are no signs that the latest government-sponsored move will lead to a satisfactory resolution.

Some groups supporting the wartime laborers had opposed even participating in the conference because of fears it would allow the Japanese companies to avoid any responsibility for their past use of Korean laborers.

But lawyers for the plaintiffs joined scholars and others for the closed-door session on July 4. Government officials mainly wanted to sound out each side for their views.

The administration of South Korean President Yoon Suk-yeol is seeking to resolve the various issues with Japan stemming from its colonial rule of the Korean Peninsula before and during World War II to focus on a more future-oriented bilateral relationship.

Tokyo and Seoul are concerned about the moves to seize assets in South Korea of the Japanese companies and sell them to compensate the laborers.

While a number of companies have different lawsuits facing them, the one involving Mitsubishi Heavy Industries Ltd. has progressed the farthest and if the company’s appeal is rejected, the move to convert its assets into cash could begin before the end of the year.

The Japanese government has described that possibility as the worst-case scenario because it has long argued that all compensation claims from the war had been resolved by agreements reached in line with the 1965 restoration of diplomatic ties between the two nations.

Lawyers for the laborers said at the July 4 news conference following the first conference session that they would ask the courts to temporarily suspend judicial procedures if the companies agreed to direct talks with the laborers.

Yoon may already be resigned to not seeing any progress in the conference. The South Korean president recently told reporters that his administration wanted to end the thinking that discussions about a future-oriented bilateral relationship could not be held unless there was progress toward resolving historical issues.