After losing Luhansk, Ukraine forces regather for defense of Donetsk 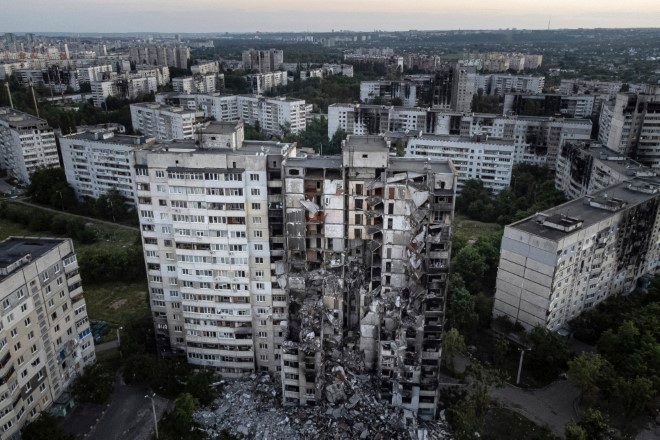 An apartment building damaged by Russian attack is seen in Kharkiv, Ukraine, on July 4. (AP Photo)

KYIV--Russian forces set their sights on their next objectives in Ukraine’s eastern Donetsk province, after President Vladimir Putin claimed victory in neighboring Luhansk province as the the five-month long war entered a new phase. The capture of the city of Lysychansk on Sunday completed the Russian conquest of Luhansk, one of two regions in Donbas, the industrialized eastern region of Ukraine that has become the site of the biggest battle in Europe in generations.

Both sides have suffered heavy casualties in the fight for Luhansk, particularly during the siege of the twin cities of Lysychansk and Sievierodonetsk. Both cities have been left in ruins by the relentless Russian bombardment.

Ukrainian forces on Tuesday took up new defensive lines in Donetsk, where they still control major cities, while Putin told his troops to “absolutely rest and recover their military preparedness,” while units in other areas keep fighting.

Since the outset of the conflict, Russia has demanded that Ukraine hand both Luhansk and Donetsk to pro-Moscow separatists, which have declared independent statelets.

“This is the last victory for Russia on Ukrainian territory,” Oleksiy Arestovych, adviser to President Volodymyr Zelenskiy, said in a video posted online.

“These were medium-sized cities. And this took from 4th April until 4th July--that’s 90 days. So many losses...”

Arestovych said besides the battle for Donetsk, Ukraine was hoping to launch counteroffensives in the south of the country.

“Taking the cities in the east meant that 60 percent of Russian forces are now concentrated in the east and it is difficult for them to be redirected to the south,” he said.

“And there are no more forces that can be brought in from Russia. They paid a big price for Sievierodonetsk and Lysychansk.”

Some military experts reckoned the hard-fought victory had brought Russian forces little strategic gain, and the outcome of what has been dubbed the “battle of the Donbas” remained in the balance.

“I think it’s a tactical victory for Russia but at an enormous cost,” said Neil Melvin of the RUSI think tank in London. He compared the battle to the huge fights for meagre territorial gains that characterized World War One.

“This has taken 60 days to make very slow progress,” he said. “I think the Russians may declare some kind of victory, but the key war battle is still yet to come.”

Melvin said the decisive battle for Ukraine was likely to take place not in the east, where Russia is mounting its main assault, but in the south, where Ukraine has begun a counteroffensive to recapture territory.

“This is where we see the Ukrainians are making progress around Kherson. There are counterattacks beginning there and I think it’s most likely that we’ll see the momentum swing to Ukraine as it tries to then mount a large-scale counteroffensive to push the Russians back,” he said.

Zelenskiy said on Monday that despite Ukraine’s withdrawal on Sunday from Lysychansk, its troops continued to fight.

“The Armed Forces of Ukraine respond, push back and destroy the offensive potential of the occupiers day after day,” Zelenskiy said in a nightly video message.

“We need to break them. It is a difficult task. It requires time and superhuman efforts. But we have no alternative.”

The battle for Luhansk is the closest Moscow has come to achieving one of its stated objectives since its forces were defeated trying to capture Kyiv in March. It marks Russia’s biggest victory since it captured the southern port of Mariupol in late May.

Putin launched his invasion of Ukraine on Feb. 24 , calling it a “special military operation” to demilitarize its southern neighbor and protect Russian speakers from what it calls “fascist” nationalists. Ukraine and the West say this is a baseless pretext for flagrant aggression to seize territory.

Serhiy Gaidai, the Ukrainian governor of Luhansk, acknowledged his entire province was now effectively in Russian hands, but told Reuters: “We need to win the war, not the battle for Lysychansk ... It hurts a lot, but it’s not losing the war.”

Gaidai said Ukrainian forces that retreated from Lysychansk were now holding the line between Bakhmut and Sloviansk, preparing to fend off a further Russian advance.

The mayor of Sloviansk said heavy shelling on Sunday had killed at least six people, including a 10-year-old girl.

Russia’s Tass news agency quoted military officials in the Donetsk Peoples’ Republic as saying three civilians died and 27 were wounded in what they said was shelling by Ukrainian forces.

Reuters could not verify the battlefield accounts.

Ukraine’s hopes for a sustained counterattack rest in part on receiving additional weapons from the West, including rockets that can neutralize Russia’s huge firepower advantage by striking deep behind the front line.

“It is a matter of how quickly the supplies come,” said Arestovych.

“In the West, there just aren’t enough weapons to be supplied. This is after all the biggest conflict since 1945... so more weapons have to be produced, and that production is on now. And at such a pace that by autumn there will be a very considerable set of weapons.”