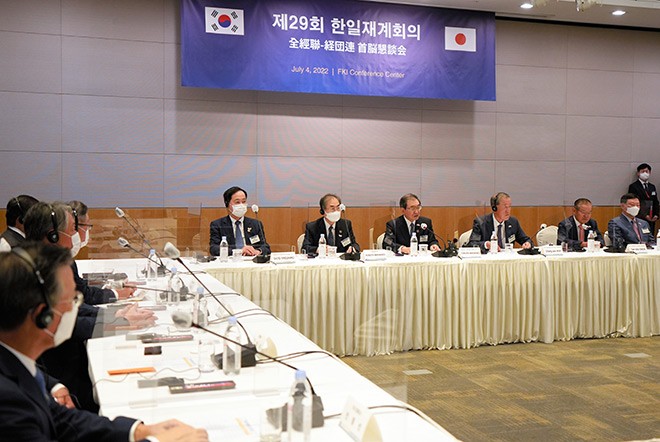 SEOUL--Business leaders of Japan and South Korea on July 4 called for an early resumption of visa-free exchanges in their first meeting here in three years after pandemic-related travel restrictions were eased.

“It is essential for Japan and South Korea to build friendly and stable relations in politics and diplomacy to expand their economic and human exchanges,” said Masakazu Tokura, Keidanren chairman, at the beginning of the session.

“We are strongly hoping that a dialogue between the Japanese prime minister and the South Korean president, as well as Cabinet members, can restart soon.”

Their meeting followed signs of a thaw in the frosty ties between Tokyo and Seoul after Yoon Suk-yeol took office in May as president of South Korea.

“The two countries are rivals competing fiercely in the global market, but there still is plenty of room for cooperation,” Huh said. “We expect a summit to be held soon to resolve bilateral economic challenges, including abolishing export restrictions and reinstating the currency swap agreement.”

After the meeting, the organizations issued a joint statement calling for promptly reinstating the visa-free program to promote exchanges in the private sector.

In the afternoon of that day, Tokura paid a courtesy call to Yoon.

“I felt the president’s strong enthusiasm to mend his country’s relations with Japan,” he told reporters later.

The South Korean presidential office quoted Yoon as telling the Keidanren chairman that both governments must work together to find a solution to outstanding questions.

Statistics by the Japanese and South Korean governments showed that visitors to each other’s country totaled about 10.5 million in 2018.

But the figure plunged to about 34,000 in 2021 due to the novel coronavirus pandemic.

Japan and South Korea have eased travel restrictions since this spring with the decline in case numbers.

(This article was written by Kiyohide Inada in Seoul and Takehiro Tomoda in Tokyo.)