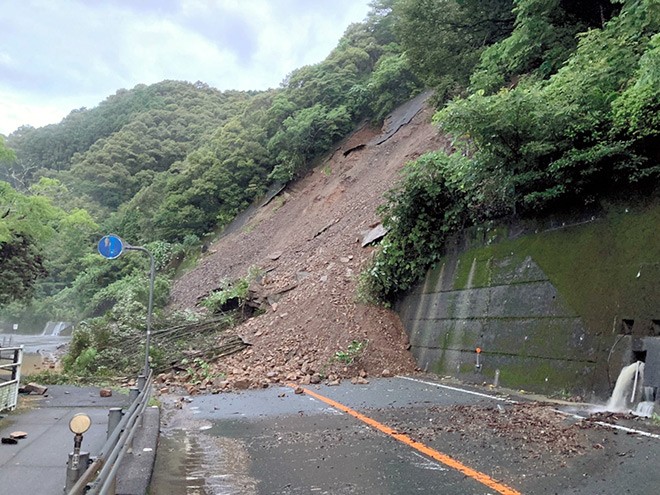 A landslide occurs along National Road No. 56 in Kochi Prefecture in the early hours of July 5 following heavy rain brought by Typhoon No. 4. (Provided by the land ministry’s Tosa office managing local national roads)

Typhoon No. 4 made landfall near Sasebo, Nagasaki Prefecture, shortly before 6 a.m. on July 5, dumping record levels of heavy rain in the Kyushu and Shikoku regions.

The Japan Meteorological Agency is calling for extra vigilance against possible mudslides from western Japan to the Pacific side of eastern Japan through July 6.

Susaki in the prefecture received a record 208 millimeters of rainfall over a three-hour period through shortly after 1 a.m.

The JMA also announced 120 mm or more of rain fell over the hour from when the typhoon made landfall near Unzen in Nagasaki Prefecture, Arao in Kumamoto Prefecture and Omuta in Fukuoka Prefecture. The agency urged residents to prepare for potentially more heavy rain.

Omuta set a record for hourly rainfall for July at 85 mm.

As of 7:30 a.m., evacuation orders had been issued to 90,610 people from 44,804 households in two cities in Ehime and Kagoshima prefectures, according to the Fire and Disaster Management Agency.

The agency also confirmed on July 5 that eight houses in Kochi were flooded below the floor.

The typhoon weakened to an extratropical cyclone by 9 a.m. and is expected to move from western Japan to the Pacific side of eastern Japan.

The expected rainfall for the 24-hour period through noon on July 6 is up to 200 mm in the Tokai region and Shikoku, 150 mm in the Kanto-Koshin and Kinki regions and 100 mm in southern Kyushu.

Heavy rain is also forecast in some areas of northern Japan as atmospheric conditions are becoming unstable due to warm, humid air blowing around the edge of a Pacific high-pressure system.

Hokkaido and the Tohoku region can expect up to 80 mm of rainfall over the 24-hour period through noon on July 6.