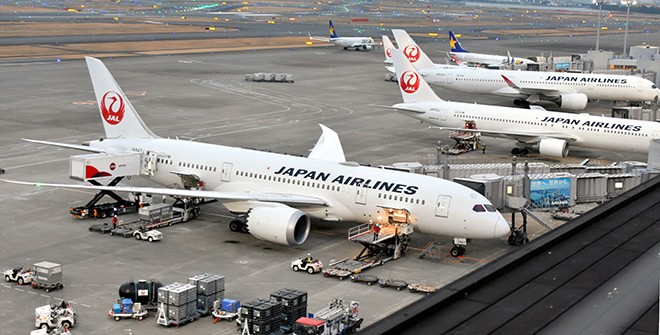 Japan Airlines Co. (JAL) and All Nippon Airways Co. (ANA) plan to raise their fuel surcharges to record highs starting in August amid the soaring prices of crude oil.

Shuichi Sakai, president of Purpose Japan Co. in Tokyo, which handles overseas travel for individuals, said the move will be "detrimental to the recovery of demand for overseas travel."

JAL said it will raise its surcharge for August and September. The surcharge for a one-way flight from Japan to Honolulu will be 30,500 yen ($224), an increase of 6,900 yen from the current cost.

The surcharge for a flight to Europe or North America will be 47,000 yen, which is 10,200 yen higher than the current charge.

The most inexpensive round-trip fare (economy class) to Honolulu in August and September was listed at 55,000 yen as of July 4. The round-trip surcharge will be raised from 47,200 yen to 61,000 yen. Passengers must pay the surcharge in addition to the airline fare.

In some cases, the surcharge is more expensive than the fare itself.

The two major airlines set their surcharges from their predetermined price lists based on the market price in Singapore, where jet fuel is bought and sold.

Not long ago, no surcharge was applied when demand for crude oil had fallen sharply due to the novel coronavirus pandemic.

Fuel prices soared due to the return of demand for air travel and economic sanctions against Russia. JAL revised its price list as fuel prices exceeded the highest level the company expected.

And that might not even be the end of it. The weakening yen could push fuel prices up even further.

The surcharge for a flight from Japan to Europe or North America is currently set at 36,800 yen based on the maximum fuel price at the range between 14,000 yen and 14,999 yen per barrel, which was assumed before JAL reviewed its price list.

If the price of fuel reaches the revised price ceiling of 20,000-yen level per barrel, a 57,200-yen surcharge will be added to the fare for one-way flights.

ANA will also raise its surcharge for August and September to a record high level.

The surcharge for a one-way flight from Japan to Hawaii will be 31,100 yen, an increase of 7,300 yen from the current one.

However, they are holding off on travel or are booking their trips earlier because travel prices will be pushed further up by the weakening yen and soaring surcharges.

(This article was written by Shinya Matsumoto and Go Takahashi.)