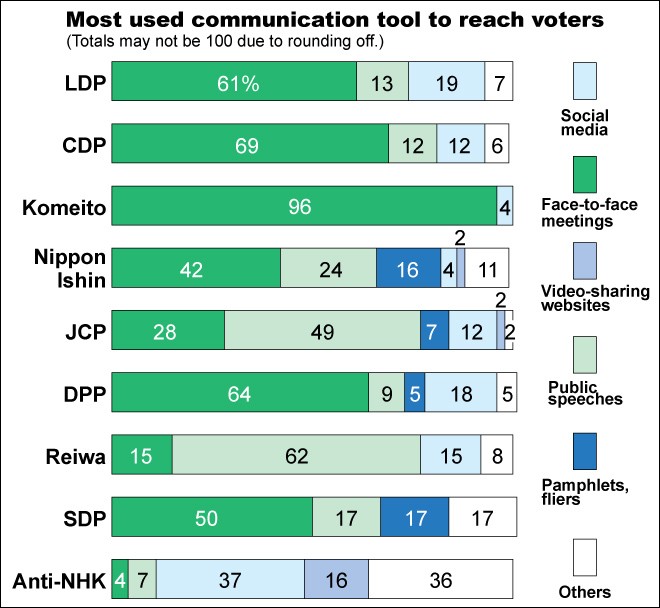 Long-established political parties still rely on face-to-face meetings or campaign speeches at major train stations to win over voters, while newer parties are more likely to use the internet to gain supporters.

That is the general finding of a survey of Upper House election candidates conducted jointly by The Asahi Shimbun and a team led by Masaki Taniguchi, a professor of political science at the University of Tokyo.

Questionnaires were mailed out to all 545 candidates, and responses were received from 512.

The questionnaire asked the candidates what communications tools they used to reach out to voters.

Ninety-six percent of the candidates of junior coalition partner Komeito said face-to-face meetings organized by the party were the most effective tool. The figure is not surprising since the party depends heavily on Soka Gakkai, a Buddhist group that is the backbone of the party’s support.

But such opposition parties as the Constitutional Democratic Party of Japan and the Democratic Party for the People also depend on in-person meetings because many are organized by Rengo (Japanese Trade Union Confederation).

The ruling Liberal Democratic Party has also established a network of local branches and workplace groups throughout the nation. Sixty-one percent of LDP candidates said face-to-face meetings were their most important communications tool.

However, 20 percent of candidates of each of the two parties said public campaign speeches and pamphlets and fliers were the most important tool.

The JCP’s dependence on public speeches was likely an attempt to attract unaffiliated voters.

When internet campaigning in national elections was permitted in 2013, 3 percent of candidates emphasized the use of social media to attract voters. The ratio reached 17 percent in the latest survey.

That was still well below the 38 percent of all candidates who stressed meetings and the 23 percent who said campaign speeches were most important.

Two of the newest parties, Reiwa Shinsengumi and the anti-NHK (Japan Broadcasting Corp.) party, which do not have networks of support groups, focused more on social media.

While 62 percent of Reiwa candidates said public campaign speeches were most important, 15 percent each cited meetings or social media. The party is live streaming candidates conversing with voters when they give speeches.

Only 4 percent of the party’s candidates said meetings were important.