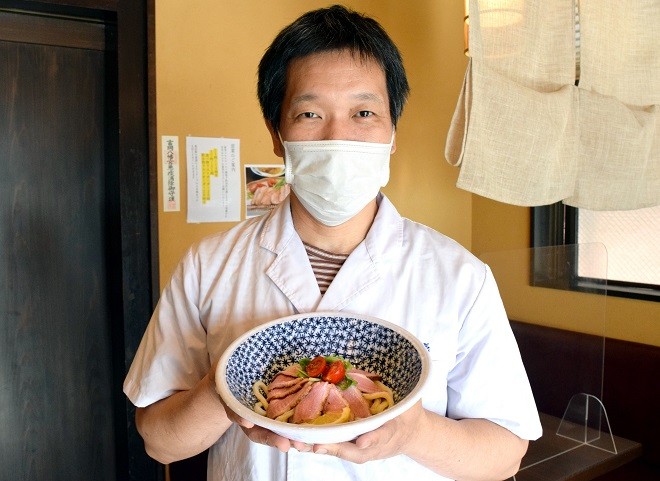 Takayuki Omori, the fourth-generation proprietor of Koshinan, shows a bowl of “udon” noodles topped with slices of roasted duck in his restaurant in Tokyo’s Koto Ward on June 29. (Natsuki Edogawa)

Takayuki Omori was shocked when he found bumps on the arms of his eldest son after letting him hold dumplings made from “soba” buckwheat flour three years ago.

His son, now 9, had just started attending elementary school at the time.

When Omori, now 44, removed his son's shirt, the child gave him a tearful look and complained that he felt itchy.

The bumps had spread across his chest and back.

Omori realized it was a symptom of buckwheat allergy.

He remembered that his son had developed hives for no apparent reason in the past. His eldest daughter, now 6, had also exhibited similar symptoms.

All he had to do was keep his children away from soba.

One problem: Omori was the fourth-generation proprietor of Sobadokoro Koshinan, a soba noodle restaurant founded 115 years ago in Tokyo's Koto Ward.

He was passionate about his work. He was continuously tinkering and went to great lengths to serve delicious noodle dishes.

Omori would travel to places to try buckwheat flour he heard tasted good, and spent months making aged roasted duck, hoping it would become a specialty at his restaurant.

But he began to feel like all his efforts were for nothing when he realized his children could not eat his soba noodles.

Omori felt a glimmer of hope when he read a post by a person online that said their allergy disappeared after entering junior high school. Maybe his kids would grow out of it.

But he did not know what he would do if his children remained allergic.

Omori washed his hands repeatedly before going home after work and was vigilant at ensuring that not even a speck of buckwheat flour was on his clothes.

He anguished over what to do for three years before he finally made up his mind to close the restaurant.

The last straw was the novel coronavirus pandemic.

Seeing so many lives lost to COVID-19, Omori decided that nothing is more valuable than health. So, he decided to only cook dishes that could be eaten by his children and would not put them at any risk.

The first thing that came to his mind was "udon." It is also a noodle, but it is made from wheat and his children are not allergic to it.

That might sound an easy enough change, but it was a struggle.

In February this year, Omori went to Kagawa Prefecture, the home of Sanuki udon, to attend a school and learn noodle-making techniques and how to prepare dashi stock.

Omori used to make dashi from dried bonito flakes for soba served at Koshinan and chose a type of soy sauce that would pair well with it.

But udon is served with dashi made from dried sardines, meaning that it would not go well with the same soy sauce.

While the amount of water is the decisive factor in cooking soba, temperature is crucial for udon.

The knowledge and techniques he had acquired from his soba-making career were of no use.

"(I must) protect my family, not the traditional taste," Omori said. "I thought it meant an evolution for Koshinan."

On June 2, the proprietor reopened the restaurant under a new name: Udon Kazoku Koshinan. The word "kazoku" means "family."

A little while ago, Omori served udon to his children, who opted for a bowl of noodles topped with slices of roasted duck--a dish he made when he was still running the soba restaurant.

After devouring the meal, his son said with a bashful smile: "It tastes good."

At least one of his patrons had said, repeatedly, that it was disappointing to see the soba restaurant close.

Someone had also posted on social media criticizing Omori for closing the 115-year-old soba restaurant out of regard for his family.

But Omori said he is not afraid of change.

He said he does not care what others say because he believes there is nothing wrong with protecting the smiles of his children.

(This article was written by Satomi Sugihara and Natsuki Edogawa.)