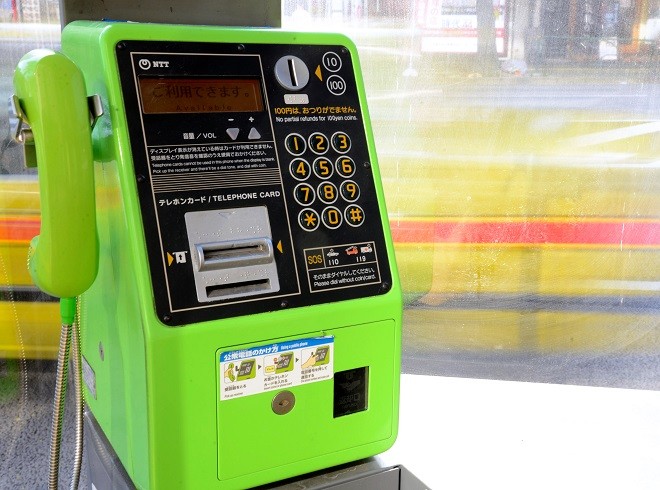 Pay phones are often mentioned in pop songs because they used to be indispensable to keeping people connected to their loved ones.

In Kaguyahime's song "Abi Rodo no Machi" (Abby Road town), a man who became estranged from his lover searches inside his pocket and finds a 10-yen (7 cents) coin.

"I can't say this loudly because I'm on a pay phone, but I love you," goes one line.

Unless you are calling from the privacy of a phone booth, anyone walking by can hear you loud and clear.

In "Aka Chochin" (Red lantern), another Kaguyahime number, a woman who has split with her lover weeps inside the phone booth on a rainy night, as if seeking refuge from the bustle of the big city in the single-occupancy "box."

Once ubiquitous, the number of pay phones today is said to have diminished to a mere one-sixth of the peak in fiscal 1984.

They recently returned to the limelight for a while, however, when a massive network failure at KDDI Corp. rendered its subscribers' smartphones useless, sending them in search of green public pay phones to communicate with their loved ones.

There being so few pay phones, however, many searched in vain.

The Asahi Shimbun's digital edition ran an account of a person who thought of locating pay phones using their smartphone, only to realize that wasn't possible.

The person then got into their car and drove around as they needed to call a family member with a disability. They finally found a pay phone after a 20-minute drive, only to realize they had no small change.

People may be advised to carry a second phone for emergencies, but not everyone can afford such an extra expense.

Similarly, it would be easier said than done for Nippon Telegraph and Telephone Corp. (NTT) to add a massive number of pay phones for emergencies.

Perhaps the best anyone can do is to discern where there are pay phones, at least near their homes.

I will start keeping small change in my pocket at all times in case my smartphone e-money becomes unusable, too. And I will take pictures of important e-tickets, just in case.

I have come to realize the importance of creating "mini refuges" ahead of emergencies.