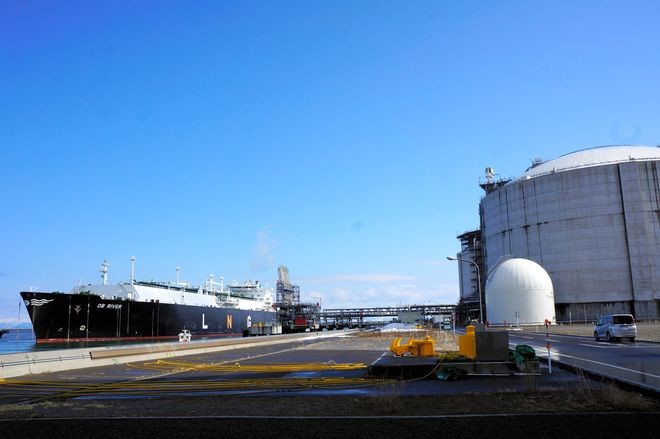 A tanker carrying LNG berths at a port in Ishikari, Hokkaido, in 2021. (The Asahi Shimbun)

Mitsui shares had lost 5.7 percent while Mitsubishi shares were down 5.4 percent by the midday break.

Japan “would have neither oil nor gas from Russia, as well as no participation in the Sakhalin-2 LNG project,” Medvedev, now deputy chairman of Russia’s Security Council, wrote on social media on Tuesday.

His remarks came after Japanese Prime Minister Fumio Kishida said at the weekend that the Group of Seven (G7) countries had agreed to capping the price of Russian oil at around half its current level.

G7 leaders last week agreed to explore imposing a ban on transporting Russian oil that has been sold above a certain price in an effort to reduce Moscow’s revenues and deplete its war chest, but had not mentioned a specific figure for the cap.

Russia announced on Friday a decree that seizes full control of the Sakhalin-2 gas and oil project in the country’s far east, a move that could force out Shell and Japanese investors.

The Sakhalin-2 project is one of the world’s largest LNG projects and about 60 percent of the LNG it supplies under long-term contracts is shipped to Japan. Mitsui and Mitsubishi hold stakes of 12.5 percent and 10 percent in the project respectively.