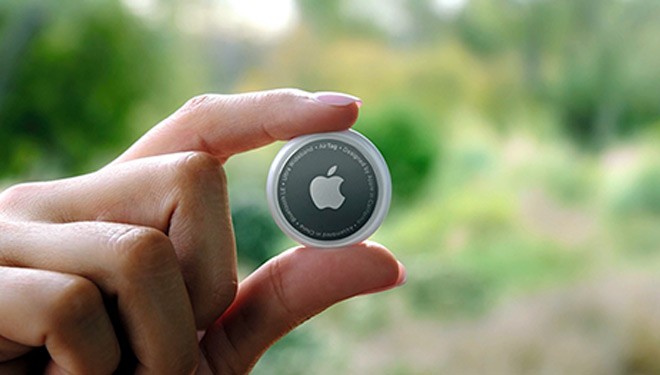 An Apple AirTag (From a movie provided by Apple Inc.)

Aichi prefectural police discovered an AirTag was placed on one of its vehicles, raising concerns that criminals may be using the devices to track police movements, according to sources.

An AirTag is a battery-operated tracking device developed by Apple Inc. to help people find lost personal items--such as their wallet, keys or luggage--by using their iPhone.

Sources said the AirTag was found attached to a police vehicle parked in a visitor parking lot at the prefectural police’s Toyota Police Station in May.

An officer who was about to get in the vehicle found a black plastic box attached to the muffler on the back underside of the car.

The officer then found an AirTag inside the box.

The box was conspicuously attached and easy to detect, which led some officials to think it was a prank. But police increasingly suspect that a criminal organization mounted it there to monitor a police investigation.

There have been many past cases around Japan where people related to organized crime groups photographed or wrote down the license plate numbers of cars parked on police premises.

Police would arrest people caught doing this for trespassing.

Private citizens previously could refer these car license plate numbers to a transportation bureau to see if a vehicle is public or private and to identify investigators’ names and home addresses.

But the Road Trucking Vehicle Law was revised to protect privacy and prevent criminal acts.

Since 2007, the rules have been strengthened and a vehicle identification number is required to reference a vehicle with a transportation bureau.

Criminal organizations may have turned to electronic devices such as AirTags as a new and relatively inexpensive way to collect information on police.

In response to the latest findings, the Aichi prefectural police asked its officers to be more vigilant inside police facilities and check to see if a suspicious object is attached when they enter or exit a vehicle.

Some measures have been taken to prevent AirTags from being abused, such as a stalker hiding it in a person’s belongings to obtain their address.

When another person’s AirTag remains nearby for a certain length of time, an iPhone will detect it and show a warning on the screen.