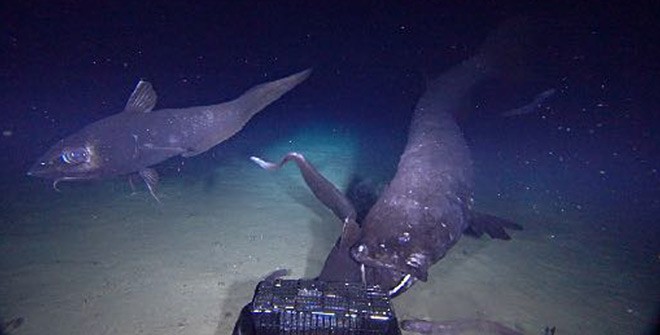 A yokozuna slickhead scares off other fish more than 2 kilometers deep off Suruga Bay in October 2021. (Provided by the Japan Agency for Marine-Earth Science and Technology)

The scientists, primarily from the Japan Agency for Marine-Earth Science and Technology (JAMSTEC), captured the fish on video more than 2 kilometers deep off Suruga Bay in Shizuoka Prefecture in October 2021.

JAMSTEC reported the yokozuna slickhead as a new species only in January last year. It is believed to be an apex predator in deep waters off Suruga Bay.

Six yokozuna slickheads have been caught, but the largest one measures 1.4 meters long.

The research team surveyed ecosystems in four sea areas, including the one off Suruga Bay, that were designated as environmental preservation zones under the Nature Conservation Law in 2020.

DNA was collected from seawater in the zones and analyzed in the study, including samples later confirmed as that of yokozuna slickhead, according to the scientists.

The researchers then sent three cameras fitted with fish food to the 2,091-meter-deep seafloor around 400 kilometers off Suruga Bay.

One of the cameras caught footage of a yokozuna slickhead driving away other fish from the container of food. Based on the size of the container, the researchers estimated the length of the predator at 2.5 meters.

The scientists said this could be the world’s largest bony fish inhabiting waters more than 2 kilometers deep.

“The one spotted this time was so huge that we repeatedly recalculated its size,” said Yoshihiro Fujiwara, a principal researcher who specializes in deep-sea biology at JAMSTEC’s Marine Biodiversity and Environmental Assessment Research Center.

“There is a possibility that large unidentified deep-sea fish variants inhabit other waters as well,” he said.

The video of the 2.5-meter-long yokozuna slickhead can be viewed on JAMSTEC’s YouTube channel at (https://www.youtube.com/watch?v=3vciHNmCMLw).