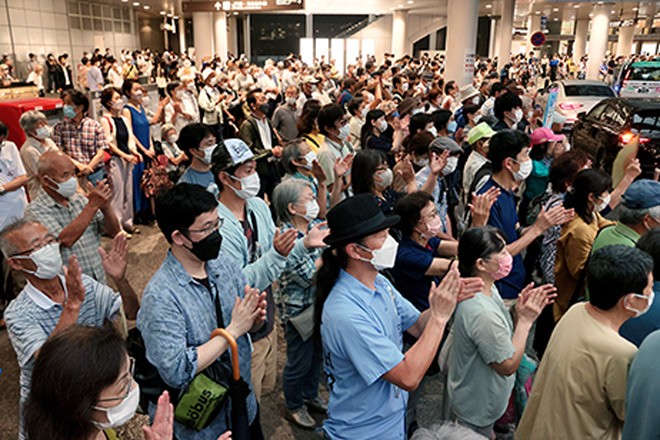 Nagoya voters applaud a speech on July 3 by a lawmaker speaking on behalf of a candidate in the July 10 Upper House election. (Takeshi Iwashita)

The ruling coalition has maintained its momentum toward winning a majority of contested seats in the July 10 Upper House election, according to a national survey conducted by The Asahi Shimbun.

The ruling parties are in a solid position to take 63 of the 125 seats up for grabs and could even approach a combined 70 seats, the survey conducted on July 4 and 5 showed.

The CDP’s opposition rival, Nippon Ishin (Japan Innovation Party), was in a position of winning 12 seats on July 10, double the number of its seats that are being contested.

Nippon Ishin could even best the CDP in winning the most seats among opposition parties in the proportional representation constituency.

In The Asahi Shimbun’s survey conducted about two weeks ago, LDP candidates were in close races in six prefectures against opposition candidates who won those seats six years ago.

But the latest survey showed the LDP candidates have pulled ahead in two of those prefectures.

In previous national elections, opposition parties united behind a single candidate in many of the electoral districts.

However, such opposition cooperation is missing this time around, and LDP candidates are leading in 28 of the 32 single-seat prefectural districts, according to the survey.

The LDP is projected to win in 19 of the 21 districts where more than one opposition candidate is running.

And even in the 11 districts where opposition parties are cooperating, the LDP candidate appears to be ahead in nine of the prefectures.

While the LDP may not be able to match the number of contested seats it held in the proportional representation constituency, its overall strong showing in prefectural districts could lead to victories for 60 seats.

Candidates for junior coalition partner Komeito have strengthened their positions in Saitama and Hyogo prefectures since the first survey.

Conversely, some opposition candidates who appeared to have early leads are now in more precarious positions.

Nippon Ishin is in a strong position to maintain two seats in Osaka Prefecture and gain a seat each in Kanagawa and Hyogo prefectures, while its candidates in Tokyo and Kyoto Prefecture are on the border of winning, the survey showed.

But the Nippon Ishin candidate in Aichi Prefecture is now engaged in a more difficult struggle.

The Democratic Party for the People incumbent in Yamagata Prefecture appears to have pulled ahead, while its candidate in Aichi Prefecture is on the border.

The Japanese Communist Party candidate in Tokyo remains in a good position to win one of six seats, but JCP candidates in Kanagawa and Saitama prefectures appear to be in weaker positions since the first survey.

The situation could change ahead of voting on July 10 because about 40 percent of survey respondents were undecided in both the prefectural and proportional representation constituencies.

Computer-generated phone numbers were used to contact voters through landline or mobile phones for the survey. A total of 10,391 valid responses were received.

On the same two days, four internet survey companies were commissioned to poll voters, and valid responses were received from 80,576 voters.