Aso under fire for victim blaming, saying only the ‘weak’ are bullied 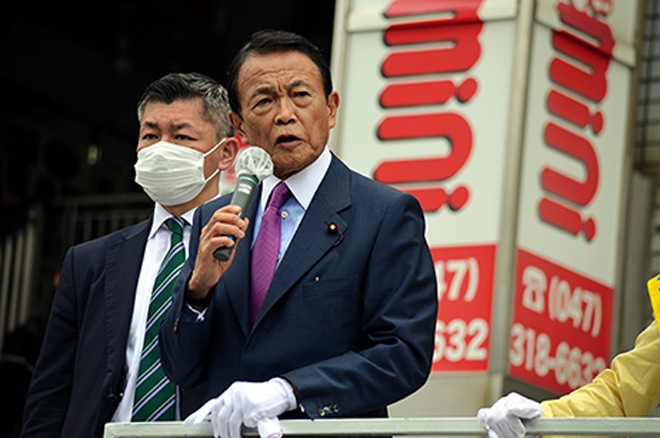 Taro Aso, the vice president of the ruling Liberal Democratic Party, is facing a backlash after suggesting in a campaign stump speech that bullying victims have only themselves to blame.

Aso, a former prime minister long known for making offensive, off-the-cuff comments, made the remark when promoting his party’s national security policy ahead of the July 10 Upper House election.

“Think of those who are bullied in their childhood--they are the weak,” he said on the streets of Ichikawa, Chiba Prefecture, on July 4. “The strong are not bullied. The same goes for countries. Those that appear strong are not targeted but the weak are.”

Aso added that deterrence only works for a country once others believe that it will likely strike back when attacked.

In its campaign platform, the LDP pledged to beef up Japan’s defense capabilities by allowing the country to possess the capability to strike an enemy base about to launch a missile against Japan.

“Some attribute bullying to victims, but I believe bullies should be held accountable,” Osaka Governor Hirofumi Yoshimura, who is also the deputy head of Nippon Ishin no Kai (Japan Innovation Party), told reporters on July 5. “Bullying is a separate issue from national defense.”

In a tweet, Akira Koike, head of the Japanese Communist Party’s secretariat, called it a moral failure.

“He doesn’t have even the most basic moral standard: Never tolerate bullying. He’s utterly insensitive to those who are suffering from bullying.”

At a July 5 news conference, education minister Shinsuke Suematsu said he cannot comment on Aso’s remark unless he clarifies what he really meant.

“Generally speaking, I don’t think we can make such an assumption (about bullying),” said Suematsu.

Social media users are also criticizing Aso for suggesting bullying only occurs because the victims are weak.

Midori Komori, a board member of the anti-bullying nonprofit organization Gentle Heart Project, lost her daughter to suicide resulting from bullying.

“His remark is divisive and violates human rights because he assumes that people’s strength determines whether they will be bullied,” said Komori. “His comment does not sound right to me.”

She said Aso is victim blaming and expressed concern his remark would mislead people about what bullying stems from.

Komori said her daughter told her four days before taking her own life that what people should cherish most is a “kind heart,” which Komori said made her realize the importance that everyone should work together in addressing the problems that lead to bullying.

Komori urged politicians to set up an organization dedicated to compiling anti-bullying measures and foster training for teachers on tackling bullying.