Even associates unsure where Kishida stands on Constitution 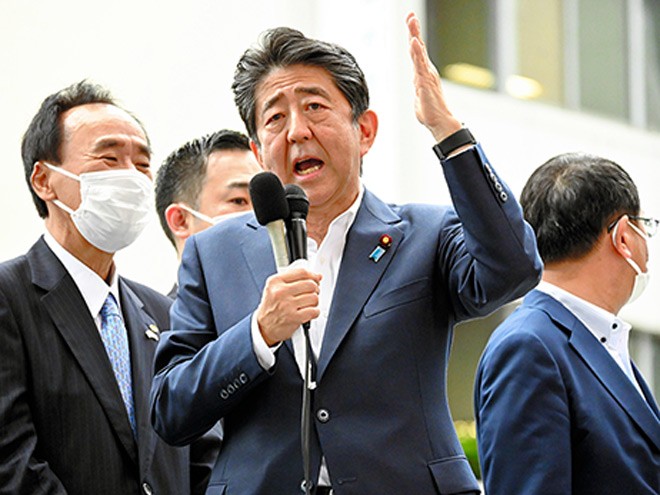 Shinzo Abe has used the Upper House election campaign to focus on “unfinished business” from his long tenure as prime minister.

But it is unclear, even among political insiders whether Japan’s current leader, Fumio Kishida, is interested in helping Abe realize his long-held goal of revising the Japan’s pacifist Constitution.

At a June 21 debate of leaders of the nine major parties held at the Japan National Press Club, Kishida said it would be important to compile a constitutional revision proposal that could gain the support of two-thirds of members of the two Diet chambers needed to initiate an amendment.

However, Kishida has been mostly mum about the issue since official campaigning for the July 10 Upper House election started the following day.

He has instead emphasized measures needed to deal with the surge in consumer prices.

If his ruling Liberal Democratic Party and junior coalition partner Komeito emerge victorious in the election, Kishida would not have to worry about holding a national election for three years.

But his speeches during the Upper House election campaign leave uncertain the policies his administration will focus on during this “golden period” of political calm.

Many issues need attention in Japan, including how to deal with the rapidly shrinking and graying of the population, and how to fix the rickety social security program that past administrations have largely ignored.

Some of Kishida’s close associates say he is serious about revising the Constitution, and that being the first to amend the postwar supreme laws would give him a political legacy.

But others say he only mentions possible revisions to provide an easy message for conservative elements in the LDP. They said he has no intention of touching the Constitution.

Abe spent seven years and eight months in the top leadership post and still could not push through constitutional revision.

In a recent campaign speech in Yachiyo, Chiba Prefecture, Abe indicated that international events showed that change is needed in Japan.

“The Ukrainian military is risking its life to protect Ukraine. The Self-Defense Forces will protect Japan,” he said.

Abe has pushed for changes in war-renouncing Article 9 of the Constitution, which prohibits Japan from maintaining land, sea and air forces.

He said Article 9 should be amended as soon as possible to end the debate about whether the SDF is a constitutional violation.

During the recent Diet session, Abe called for discussions in the Lower House commission on the Constitution to focus on Article 9.

But Kishida is not the only one who does not share Abe’s enthusiasm.

Junior coalition partner Komeito, for one, is not in favor of amending Article 9 at all. In fact, the party has included in its platform for the Upper House campaign wording to maintain that article as is.

Komeito leader Natsuo Yamaguchi has repeatedly said that most Japanese now recognize the SDF as being constitutional so there was no need to rewrite the Constitution to allow the SDF to continue carrying out its duties.

He said he did not believe the SDF was in an unstable position just because some people might say it violates the Constitution.