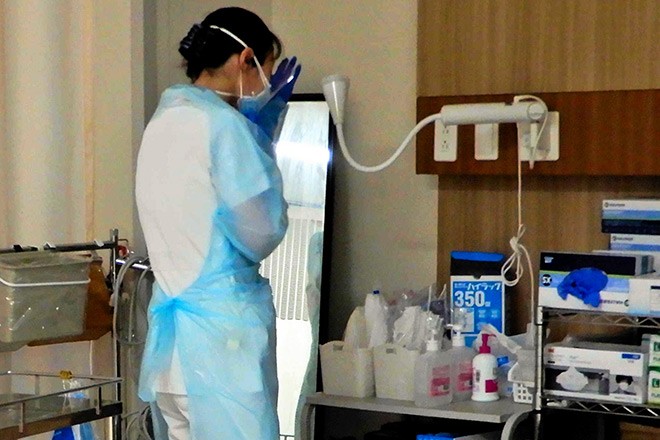 A nurse puts on protective gear to take care of COVID-19 patients at Tachikawa Medical Center in Tachikawa, western Tokyo, on June 23. (The Asahi Shimbun)

A sense of crisis is heightening among government officials as the number of COVID-19 cases rockets upward, this time apparently driven by the BA.4 and BA.5 subvariants of the Omicron variant.

The figure was about 1.9 times more than the previous Tuesday.

The upward trend continued on July 6, as the Tokyo metropolitan government confirmed 8,341 new infections, or 2.2 times more than the figure from the previous Wednesday.

It represents the 19th straight day of week-on-week increases.

It also marks the first time in about three months--since April 14--the daily figure topped 8,000 in the capital.

The resurgence is prompting warnings from officials across Japan that the game has changed once again.

“We have entered an expansionary phase for infections,” Ehime Governor Tokihiro Nakamura said after announcing a record-high 582 confirmed cases on July 5.

New patients per 100,000 population during the week until July 5 increased by 1.7 times from the previous week, which outpaced the national average.

Nakamura said many patients have contracted the virus by “having dinner with many people for long hours” and “having conversations without wearing a mask at the gym and other places.”

During a two-week period until July 4, 50 infection clusters occurred in the prefecture.

Nakamura said one such incident was "when people went wild at a party and drank for hours."

Nakamura said the more contagious BA.5 subvariant of the Omicron variant is likely the cause of the latest surge.

“We are not at the stage for imposing strong restrictions on socio-economic activities,” he said.

But he urged residents to avoid behavior and activities likely to spread the virus.

Shimane Prefecture has continued to beat its own record of new cases almost daily since late June.

“The current infection situation is more extraordinarily grave than ever before,” Shimane Governor Tatsuya Maruyama said at a news conference.

He said requesting the central government to issue pre-emergency measures in the prefecture “is an option,” although it “will be a little later” because local health care services have not yet become overstrained.

In Aichi Prefecture, the figure remained within record numbers, but the daily count reached 2,481 on July 5, up by 80 percent from the previous Tuesday.

“The way the number has gone up is abnormal,” Governor Hideaki Omura said. “It is safe to say that we have clearly entered the seventh wave of infections.”

Of those, 60 work at the same company and perform tasks such as transporting low-level radioactive waste inside the plant.

Fukui prefectural officials are calling it an infection cluster.

KEPCO said the situation has not affected the plant’s operations.

In Miyazaki Prefecture, where four BA.5 infections have been confirmed, officials are concerned about the rise of the number of patients as well as the occupancy rate of hospital beds.

The prefectural government "keeps an eye on the possibility" of issuing its own alert to restrict activities of residents once again, an official said.

The Fukuoka prefectural government on July 6 confirmed its first BA.4 infection  case. The government then issued its own COVID-19 alert for the first time since May 31, urging residents and businesses to take thorough anti-infection measures.

The nationwide surge is raising red flags for the central government over its plan to launch a campaign to promote tourism, a similar one to the troubled Go To Travel campaign in 2020.

Deputy Chief Cabinet Secretary Seiji Kihara said at a news conference on July 6 that the government will “make an appropriate decision by the end of the first half of July,” suggesting the plan will be delayed.

“We will continue to monitor infection trends, such as the number of new patients, the occupancy rate of hospital beds, the number of recuperating patients and the number of deaths,” Kihara said.

Prime Minister Fumio Kishida has said the campaign would start in the first half of July if infection numbers improved in June.