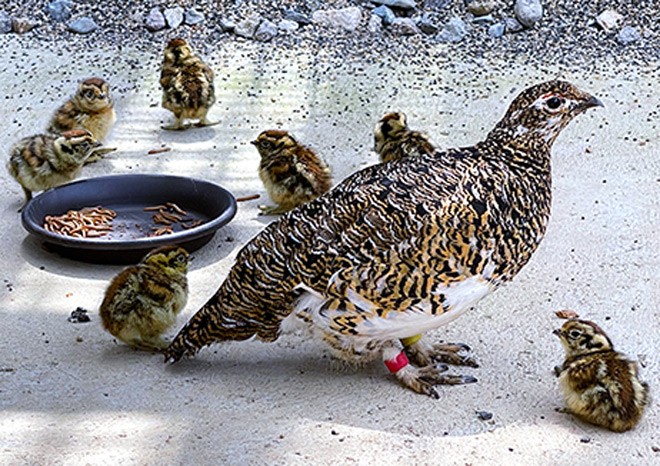 NASU, Tochigi Prefecture--Chicks were hatched from eggs laid by one of wild rock ptarmigans brought to a zoo here for the first time under a project to restore the number of the endangered species.

Nasu Animal Kingdom is tasked with breeding rock ptarmigans captured in the Central Japan Alps of Nagano Prefecture before releasing them into the wild.

The zoo announced on July 5 that eight chicks were hatched on July 2 after their mother, one of the birds transported to the zoo for the project, laid nine eggs.

The rock ptarmigan, designated as a special natural treasure, was believed to have gone extinct in the Central Japan Alps because there had been no reports of any sighting of the birds since 1969.

But one female rock ptarmigan was spotted in 2018 in the Central Japan Alps, prompting the Environment Ministry to launch the project to revive the species’ population.

Three female rock ptarmigans are currently incubating their eggs at Nasu Animal Kingdom. The zoo plans to transport some of the chicks to the Central Japan Alps in August, along with their mothers, if they are hatched.