Pro-revision parties differ on what to change in Constitution 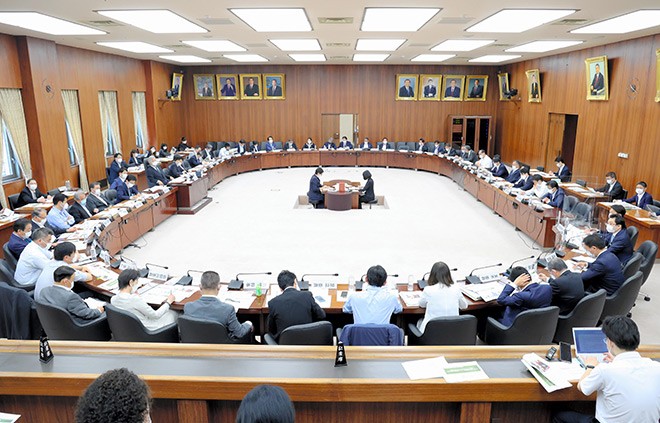 Lawmakers hold discussions in the Lower House Commission on the Constitution. (Koichi Ueda)

Even if constitutional revision proponents secure a two-thirds majority in the Upper House, differences in opinion over what should be changed could thwart any effort on what would be an unprecedented undertaking.

Both the LDP and Nippon Ishin want to maintain the current wording in Article 9 about renouncing war as a sovereign right. They also want to leave intact the wording that prohibits Japan from maintaining land, sea and air forces.

But the parties do want to add wording to the article to make clear the legal existence of the Self-Defense Forces.

Komeito has not gone that far and is only calling for more discussions about whether the extra wording about the SDF is necessary.

Although the DPP also favors more discussions, party leader Yuichiro Tamaki has said he was not sure what change would occur even if the LDP wording was approved.

There are also differences over another proposed amendment for dealing with major emergencies, such as natural disasters.

The LDP and Nippon Ishin are proposing a temporary concentration of government authority during such emergencies and allowing Cabinet orders to have the same effect as laws.

But Komeito and the DPP say that Diet authority should be maintained even during such emergencies. They are calling for a measure to extend the terms of lawmakers if they end during a major emergency.

The postwar Constitution has never been revised.

Approval from two-thirds of lawmakers in both Diet chambers is needed to initiate the process for constitutional revision and a national referendum on the proposals.

Projected wins by the four parties in the July 10 elections are expected to give the pro-revision camp a two-thirds majority in the Upper House.

But the disagreements on specifics could dash plans even before revision proposals are submitted to the commissions on the Constitution of the two Diet houses for discussions.

Other opposition parties also have differing opinions regarding constitutional revision.

The main opposition Constitutional Democratic Party of Japan feels there is no need to write in the SDF in the Constitution, but it is not opposed to holding discussions on amending other parts.

The Japanese Communist Party and the Social Democratic Party are steadfastly against any tinkering with the nation’s supreme laws.

Reiwa Shinsengumi head Taro Yamamoto believes Japan is not complying with the Constitution, especially Article 25, which guarantees everyone the “right to maintain the minimum standards of wholesome and cultured living.”

(This article was written by Takashi Narazaki and Tsubasa Yokoyama.)