Witnesses to shooting of Abe thought bomb had exploded 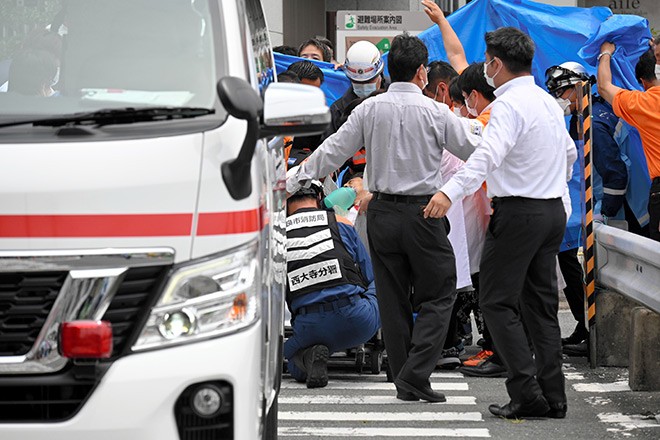 NARA--The first shot fired by a suspected gunman apparently missed former Prime Minister Shinzo Abe, but the second blast caused the veteran politician to collapse, according to a 17-year-old witness.

The witness, a female high school student who lives in Nara, said she was at a cram school located on the fourth floor when she watched Abe deliver a speech on the street below.

She said a man approached Abe from behind and fired a weapon that looked like a “bazooka.”

After the first shot, Abe continued speaking, she said.

The shooter, who was wearing a gray-colored top, took a couple steps back and fired again. Abe then appeared to lose power and fell down, she said.

The shooter put the gun down and was soon overpowered by security personnel, the student said. A person carrying an automated external defibrillator ran to the scene.

Some people fainted, apparently in shock, she said.

A 26-year-old man said he was standing behind a guard rail a few meters from Abe when he started the speech.

Within about a minute, the man heard a “bang” and felt a blast while he crouched down, he said. “I thought someone threw a bomb,” he said.

After a brief moment of silence, Abe fell forward and the crowd started screaming, he said.

A candidate in the July 10 Upper House election was red-faced and crying while running toward the collapsed Abe.

Doctors and nurses from nearby health care organizations also rushed to the scene.

The man is from Tsu, the capital of Mie Prefecture, and said he was visiting Nara for sightseeing purposes. He just happened to be in the area when Abe started his speech.

“There were high school students in the crowd,” he said. “Shootings happen in the United States, but I cannot believe something like this could occur in Japan.”

‘MY HEART IS STILL BEATING FAST’

A man in his 30s who works at a real estate company near the scene said, “I heard a ‘bang’ sound, like a bomb exploded, around 11:30 a.m., and then saw smoke coming from the area.”

“A big crowd of people was already there because Abe was coming. But the crowd got even bigger,” he said.

A 53-year-old woman who lives in Nara received a flier about Abe’s speech when she got off a bus, so she stopped by the site.

“I saw a man walking and approaching Abe. Then I heard two gunshots, ‘Bang! Bang!’ The man remained silent. He did not run away or fight when he was caught,” she said.

She described the gun as having a long cartridge and shape that would require two hands to hold.

“My heart is still beating fast, and I’m very scared,” she said.

An 81-year-old woman who lives nearby was hanging laundry on a veranda at her home when she heard two loud gunshots.

Then she saw on television that Abe had been shot.

“I just hope he is all right,” she said.