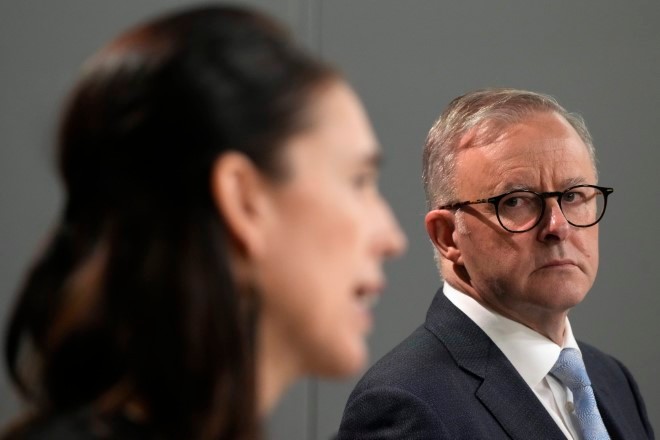 Abe was shot in western Japan and airlifted to a hospital. Officials said he was not breathing and his heart had stopped. Police have arrested a suspected gunman at the scene. The attack was a shock in one of the world’s safest countries with some of the strictest gun control laws.

Secretary of State Anthony Blinken said the U.S. was “deeply saddened and deeply concerned” over the attempted killing of Abe.

“We don’t know his condition. We do know that apparently he’s been shot. Our thoughts, our prayers are with him, with his family, with the people of Japan. This is a very, very sad moment,” he said on the sidelines of the Group of 20 rich and developing nations meeting on Indonesia’s Bali island.

Former U.S. President Donald Trump said the attack on Abe was devastating. He described Abe as a “truly great man and leader” and said Abe “was a true friend of mine and, much more importantly, America.”

“This is a tremendous blow to the wonderful people of Japan, who loved and admired him so much. We are all praying for Shinzo and his beautiful family!” Trump said on his social media app.

“Shocking news from Japan that former PM Shinzo Abe has been shot. Our thoughts are with his family and the people of Japan at this time,” Albanese tweeted.

New Zealand Prime Minister Jacinda Ardern, who was in Sydney meeting with Albanese on Friday, said she was “deeply shocked.”

“He was one of the first leaders I formally met when I became Prime Minister. He was deeply committed to his role, and also generous and kind. I recall him asking after the recent loss of our pet when I met him, a small gesture but one that speaks to the kind of person he is,” Ardern said. “My thoughts are with his wife and the people of Japan. Events like this shake us all to the core.”

“Deeply distressed by the attack on my dear friend Abe Shinzo. Our thoughts and prayers are with him, his family, and the people of Japan,” Indian Prime Minister Narendra Modi tweeted.

Philippine Foreign Secretary Enrique Manalo said he learned the news with great shock and dismay. “I extend my deep sympathy and pray for his early recovery,” he said.

Indonesian Foreign Minister Retno Marsudi, who is in Bali as president of the G-20, conveyed the G-20 foreign ministers’ “deepest sympathies and our prayers for the speedy recovery” of Abe.

Other former world leaders condemned the appalling attack on Abe, who was the longest serving prime minister in Japan. He led Japan from 2006 to 2007 and again from 2012 before stepping down in 2020 due to poor health.

Former Australian Prime Minister Kevin Rudd said “an attack on any democratically elected political leader in the world is an attack on supporters of democracy everywhere.”

“Shinzo Abe has been a dynamic political leader of Japan over many years, and we all hope that he will recover and resume his important responsibilities in the Diet,” Rudd said on Facebook.

Two other former Australian Prime Ministers, Tony Abbott and Malcolm Turnbull, reacted in disbelief. Abbott called it a “shocking act of violence” and Turnbull said he was horrified. They both expressed hope and prayers that Abe will pull through.

“May God bless him with a full recovery,” he said.