Shinzo Abe dies after being shot in Nara with homemade gun

The moment former Prime Minister Shinzo Abe is shot and Tetsuya Yamagami, the suspected gunman, is caught in Nara on July 8 (Video footage provided by witness) 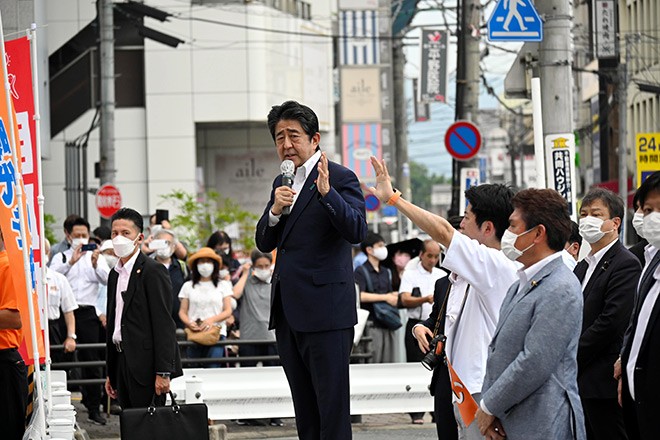 Former Prime Minister Shinzo Abe makes a speech in front of Yamato-Saidaiji Station of the Kintetsu Line in Nara on July 8. (Mami Ueda)

NARA--Shinzo Abe, Japan’s longest serving postwar prime minister, died on July 8 after being shot while giving a speech in Nara.

His death was confirmed at 5:03 p.m. by the Nara Medical University Hospital.

Abe, who held enormous political clout throughout his career, was 67.

He was shot while giving a stump speech for a candidate in the July 10 Upper House election in front of Yamato-Saidaiji Station of the Kintetsu Line around 11:30 a.m. on July 8.

Witnesses said they saw a man approaching Abe from behind, heard two loud “bangs,” and then watched as Abe collapsed to the ground.

Police arrested Tetsuya Yamagami, 41, of Nara on suspicion of attempted murder and seized the weapon believed to have been used in the shooting, investigative sources said.

The sources said the gun appeared to be handmade, with the barrels wrapped in tape.

Defense Minister Nobuo Kishi, Abe’s younger brother, said doctors were doing everything they could to save Abe, including giving him blood transfusions, after he was rushed to a hospital in a state of cardiac arrest.

The hospital said Abe never regained consciousness. He had two gunshot wounds in the neck.

Born in 1954 as the second son of Shintaro Abe, who would later serve as foreign minister, Shinzo Abe worked for a time at Kobe Steel Ltd. after graduating from Tokyo’s Seikei University.

He took over the Lower House seat after his father’s death, winning his first term in 1993.

Abe first became prime minister in 2006 at 52, the youngest prime minister after World War II. But he stepped down after about a year due to health reasons.

He began his second stint as prime minister in December 2012 and served seven years and eight months.

As prime minister, Abe pushed through national security legislation that allowed for a partial exercise of the right to collective self-defense.

Twice under his watch, the consumption tax rate was raised, first in 2014 from 5 percent to 8 percent, and then again in 2019 to the current 10 percent.

Abe stepped down in September 2020 after the return of the ulcerative colitis that led to his first resignation.

Both of his administrations were dogged by scandals.

In his second stint as prime minister, critics and opposition parties said Abe’s friendly ties to the operators of two educational institutions—Kake Educational Institution and Moritomo Gakuen—influenced government policy in their favor.

His support group was also found to have subsidized a party for supporters at a Tokyo hotel on the eve of a cherry blossom viewing party.

Abe continued to wield influence even after stepping down as prime minister, calling for constitutional revision, a long-held goal, as well as increased defense spending in light of Russia’s invasion of Ukraine.