A man believed to be Tetsuya Yamagami, the suspected gunman in the fatal attack against former Prime Minister Shinzo Abe, is seen standing behind Abe as he delivers a stump speech in Nara on July 8. (Provided by a witness.) 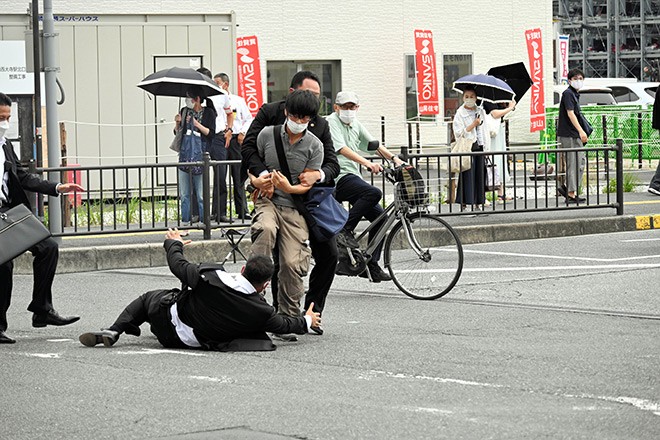 The fatal shooting of former Prime Minister Shinzo Abe does not appear to have been politically motivated, investigative sources said.

Tetsuya Yamagami, 41, who was arrested on suspicion of attempted murder, was quoted as telling investigators, “It was not because I held a political grudge toward Abe.”

Yamagami, whose profession is unknown, lives in Nara. Police have searched his home.

Abe, 67, was delivering a stump speech on the street in front of Kintetsu Railway’s Yamato-Saidaiji Station in the city.

A gun that appears to be homemade was found at the scene.

Police searched Yamagami’s residence as well as a home in Nara where a relative is believed to live.

The Defense Ministry said a person with the same name and of the same age as Yamagami served as a member of the Maritime Self-Defense Force for three years to 2005.

He learned how to shoot and assemble and disassemble rifles during his limited term in the MSDF, sources said.

In a video captured by a person attending the rally, a man believed to be Yamagami is seen standing in the the crowd around 5 to 10 meters behind Abe.