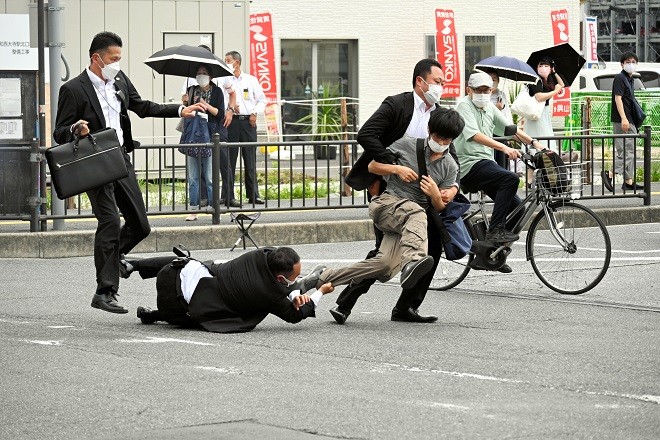 The suspected gunman is restrained by security personnel after former Prime Minister Shinzo Abe was shot in Nara on July 8. (Mami Ueda)

A politician being felled by an assassin’s bullet while stumping during an election campaign is sadly one of the risks that a leader can face. Still, incidents of this magnitude invariably send shock waves across the world.

The deed was orchestrated by Ketsumeidan (literally, Blood-pledge Corps), a terrorist organization whose members were committed to “killing one target each.”

Its leader, Nissho Inoue (1886-1967), was quoted as telling his comrades at the time that an election offers “the ideal opportunity for taking down political party bigwigs,” according to the book “Ketsumeidan Jiken” (A case of Ketsumeidan) by political scientist Takeshi Nakajima.

But a national election in modern-day Japan having such a tragic outcome? I for one just didn’t see it coming.

On July 8, gunsmoke invaded the otherwise-familiar sight of campaign banners set up in front of a train station and a crowd listening to political speeches.

I pray for the soul of Shinzo Abe, the slain former prime minister.

As expected, all political parties issued statements vowing to never yield to violence.

We may not feel close to politicians in our daily lives, but they come to us at election times, enabling us to meet them in person, hear what they have to say and ask them questions.

But the 41-year-old suspect, who was arrested on the scene, used that chance to take a life.

Waiting for his prey with a concealed firearm that apparently was homemade, I wonder what dark passions possessed him.

I mentioned earlier that I never expected such a violent assault in present-day Japan. Unfortunately, though, violent assaults against politicians do happen from time to time.

Nagasaki Mayor Iccho Ito was fatally shot in 2007. The unconscionable cowardice of such an act of violence cannot be condemned enough.

The Ketsumeidan leader, Inoue, told a magazine after World War II, “I fervently pray for the realization of a society where politics are conducted rightfully and nobody even thinks of resorting to terror.”

He was completely wrong. Whatever the political situation, only free speech and the democratic process can offer hope of better things to come.