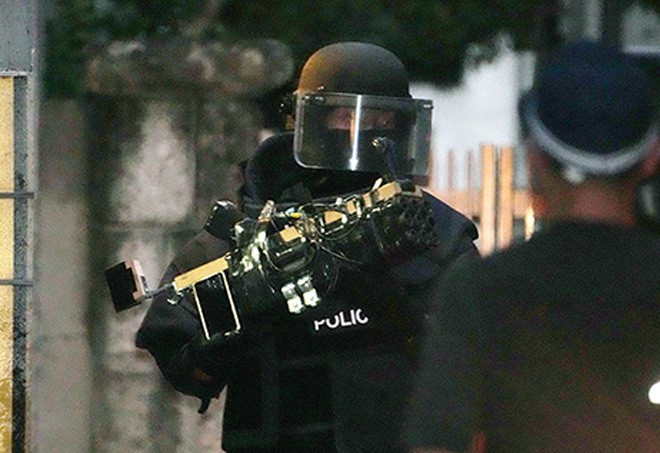 Police retrieve a material believed to be potentially dangerous from Tetsuya Yamagami’s home in Nara on July 8. (Takuya Isayama)

A man who was arrested in connection with the assassination of former Prime Minister Shinzo Abe on July 8 told investigators that he harbored a “grudge” against him, citing a religious organization, investigative sources said.

“My family joined that religion and our life became harder after donating money to the organization,” Tetsuya Yamagami, who is unemployed, was quoted by the sources as telling police. “I had wanted to target the top official of the organization, but it was difficult. So, I took aim at Abe since I believed that he was tied (to the organization). I wanted to kill him.”

Yamagami, 41, a resident of Nara, also told police that he does not hold any ill feelings toward Abe’s political convictions.

In addition, he told police that he was attempting to make bombs, according to the sources.

A man who identified himself as a relative of Yamagami told The Asahi Shimbun that his family had trouble with the religious organization.

“His family fell apart due to the group,” the man said. “I am convinced that Yamagami suffered damage from the organization."

The suspect lived in an apartment about 3 kilometers from Kintetsu Railway’s Yamato-Saidaiji Station in Nara, near where he is accused of fatally shooting Abe. The prime minister was making a campaign speech on the street on behalf of a candidate for the July 10 Upper House election.

Yamagami learned of Abe’s July 8 visit there via the ruling Liberal Democratic Party’s website. Abe’s visit was decided on only the evening before, and the LDP published the schedule at 7 p.m. and local LDP politicians spread the word on Twitter.

Yamagami used a homemade gun measuring about 40 centimeters long and about 20 cm wide in the attack on Abe. After the shooting, he was immediately arrested on suspicion of attempted murder.

Police confiscated several guns similar to that type during a search of his apartment later that day, along with some explosives, cylindrical objects and a personal computer. Officers also seized copies of books and notebooks from his parents’ home in Nara.

An official close to the Defense Ministry confirmed that Yamagami had served in the Maritime Self-Defense Force for three years from 2002. He learned the necessary skills to assemble and dissemble a firearm and shoot one while he was with the MSDF.

A senior Defense Ministry official confirmed he left the MSDF at his own accord and did not apply to serve in the SDF reserves.

For about a year and half until May, Yamagami worked for a staffing agency based in Osaka Prefecture, operating a forklift at a warehouse in Kyoto Prefecture.

An official with the staffing agency described him as “quiet.”

“He hardly spoke and did not spend time with people around him,” the official said. “He ate lunch alone inside his car.”

He conveyed his decision to quit the staffing agency in April, citing poor health.

Yamagami joined the MSDF after graduating from an elite public high school in Nara Prefecture, according to the agency.

He also told agency officials that he had worked for multiple companies as a dispatched staff worker or part-time worker after obtaining a license as a financial planner and real-estate transaction manager following his discharge from the MSDF.

During the police search of his home, officers urged residents in the neighborhood to evacuate after 9:30 p.m. on July 8, announcing that explosives were found in Yamagami’s apartment.

A man in his 60s who lived next to the suspect’s home said he had never met Yamagami, but heard strange sounds coming from his room over the past month.

“It was a sound similar to one using a saw to cut a tree and I heard it several times at night,” the neighbor said.