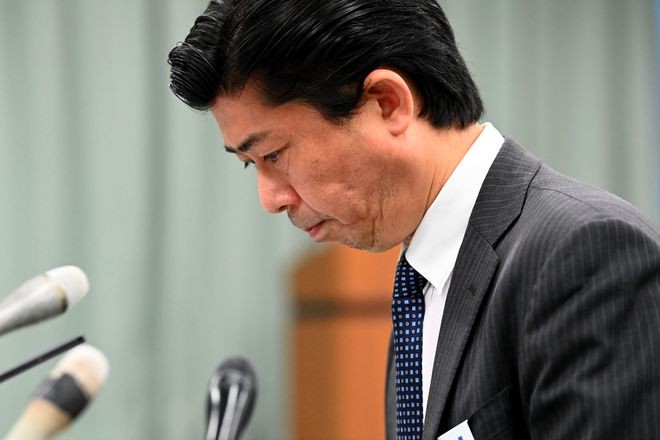 Tomoaki Onizuka, chief of the Nara prefectural police, during a news conference on July 9 in Nara (Nobuhiro Shirai)

NARA—The Nara prefectural police chief said he would not step down over flaws in security that apparently allowed a gunman to fire two shots and kill former Prime Minister Shinzo Abe.

“I think it is undeniable that there were flaws related to protection and security,” Tomoaki Onizuka, 50, said at a news conference on July 9. “I deeply feel the weight of responsibility.”

But he denied that he would step down, saying, “It is my responsibility to clarify the security problems.”

It was Onizuka’s first public statements about the shooting.

“This is the most remorse and heartbreaking grief I’ve felt in my 27-year career,” Onizuka said.

A senior official of the Nara prefectural police’s security division led the security detail for Abe, who was fatally shot on July 8 while giving a speech in Nara for a candidate in the July 10 Upper House election.

Onizuka said police will review the planning stages, the personnel arrangements, the abilities and experience of each security individual, among other things.

The campaign event featuring Abe was decided on short notice, and a draft for a security plan was compiled on the night of July7.

Onizuka checked and approved the plan on the morning of July 8.

“There were no modifications, and I felt comfortable with the plan,” he said.

Video footage shows the suspected gunman, Tetsuya Yamagami, 41, approaching Abe from behind and getting close enough to fire a shot.

“I will thoroughly check to see what countermeasures were in place,” Onizuka said.

The shot appeared to miss the former prime minister. The assailant then fired a second shot, which is believed to have killed Abe.

Onizuka was asked if police and others reacted too slowly after the first shot was fired.

“I have seen some footage, including security camera footage,” he said. “I will thoroughly check if the security plan was sufficient to respond to the sound of a gunshot.”

Abe had given a campaign speech near Yamato-Saidaiji Station in Nara on June 28. But that event had been planned well in advance.