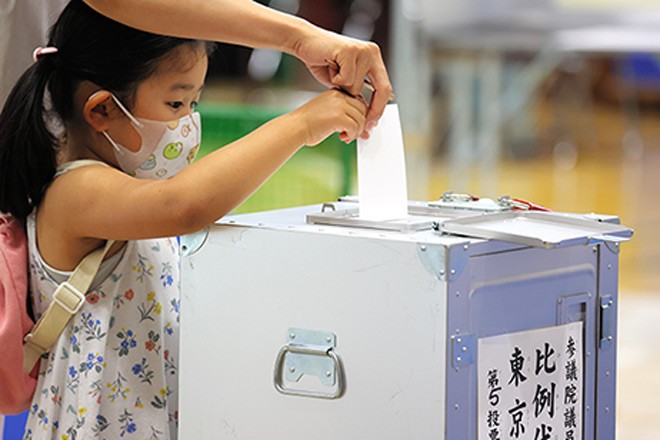 A parent accompanied by a daughter casts a ballot at a polling station in Tokyo’s Chuo Ward on the morning of July 10. (Naoko Kawamura)

The number of ballots cast early prior to election day hit 19,613,956, a record in an election for the upper chamber of the Diet.

The figure represented 18.60 percent of all registered voters, including those overseas, as of June 21, for an increase of 2.55 million voters compared with the 2019 election.

Turnout in Japan as of 6 p.m. was 27.38 percent, up 0.08 percentage point from the same time of the day in the 2019 election for the upper chamber of the Diet, according to the Ministry of Internal Affairs and Communications.

Seventeen days were allotted for campaigning this time around, or one day more than three years ago, which explains the record number of votes cast early.

The voting determined the distribution of 125 seats, including a by-election in Kanagawa Prefecture neighboring Tokyo.