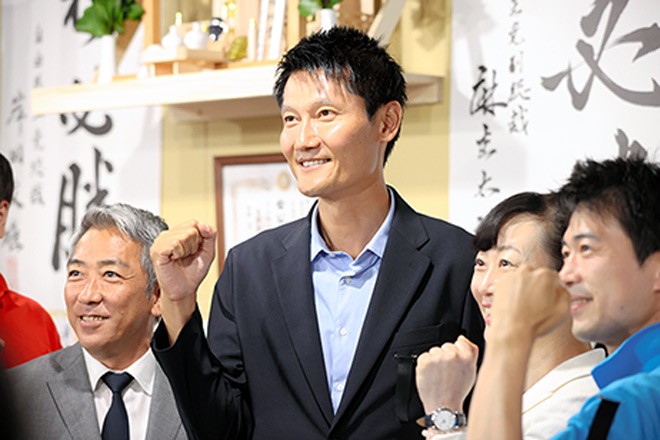 Kentaro Asahi of the ruling Liberal Democratic Party celebrates his re-election as an Upper House member on July 10. (Jin Nishioka)

Despite the gains being made, the mood was somber in many LDP campaign offices as the election came two days after former Prime Minister Shinzo Abe was murdered.

For example, Kimi Onoda, 39, the LDP incumbent in Okayama Prefecture, retained her seat, but told reporters she found it difficult to continue sporting a smile in the presence of voters on the final day of campaigning. Abe appeared in Okayama on July 7, the day before he was gunned down in Nara Prefecture while giving a campaign speech.

Onoda and her staff observed a moment of silence after media organizations called her victory.

The main opposition Constitutional Democratic Party of Japan was struggling as a number of incumbents were being projected to go down in defeat.

Yuko Mori won a seat in Niigata Prefecture six years ago due in large part to the support of the other opposition parties. While a similar strategy worked in the last Upper House election three years ago, there was less cooperation behind Mori this year.

In other developments, Sanseito (political participation party) gained a seat in the proportional representation constituency in its first foray in a national election. The party was formed by disenchanted voters who felt no political party was up to the task of governing.

Reiwa Shinsengumi followed up on its success in the proportional representation constituency in the Upper House election three years ago when it won two seats and garnered at least one seat in that constituency this time.