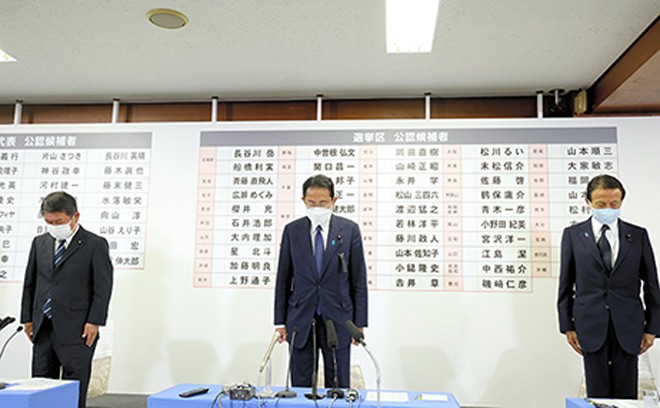 The jubilant mood that normally prevails at the Tokyo headquarters of the ruling Liberal Democratic Party when it wins an election was noticeably somber July 10 despite the party’s gains in the Upper House poll.

The party is still reeling from the shocking assassination of former Prime Minister Shinzo Abe, gunned down two days earlier while giving a campaign speech in Nara Prefecture.

Prime Minister Fumio Kishida, LDP Vice President Taro Aso and other key executives observed a moment of silence for the slain lawmaker, who served longer than any leader in the nation’s history.

After observing the ritual of paying respects, Kishida proceeded with the traditional practice of placing flowers on a large board for those LDP candidates projected to win a seat.

Even though the ruling coalition appeared to be on course for a big win, Kishida barely smiled when word of another successful LDP candidate came in.

A number of LDP executives wore black arm badges as a mark of mourning.

Toshimitsu Motegi, the LDP secretary-general, pledged to those assembled that the party would carry on the legacy that Abe left. That, he added, included constitutional revision, a goal Abe desperately tried to achieve during his nearly nine years in office.

Motegi vowed to forge ahead with discussions within the ruling coalition as well as with opposition parties Nippon Ishin (Japan Innovation Party) and the Democratic Party for the People, which also have come out in favor of amending the pacifist Constitution.

The discussions are expected to focus on a timetable for amending the Constitution as well as narrowing down amendment proposals to be tabled, he said.

Sanae Takaichi, the LDP policy chief, noted that the large gains by the ruling coalition ensured stability for the Kishida administration, adding that national security issues, constitutional revision and economic measures were a priority.

Concentrating on those key issues would be the best way to honor Abe, she said.