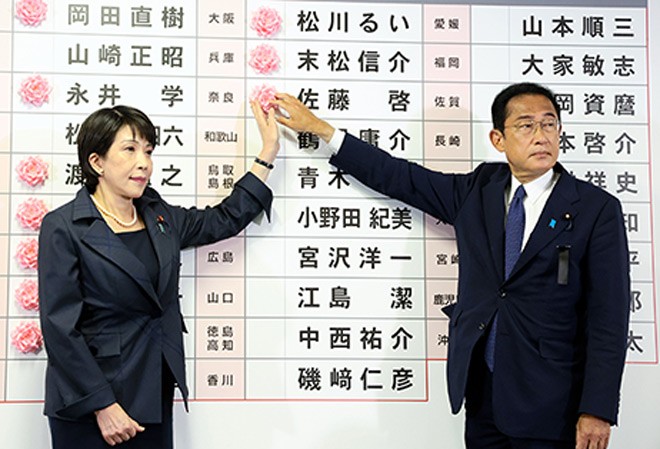 Prime Minister Fumio Kishida and Sanae Takaichi, the policy chief of the ruling Liberal Democratic Party, place a flower next to the name of a successful LDP candidate in the July 10 Upper House election. (Koichi Ueda)

The prospect of a national referendum being held on revising the Constitution moved closer to reality after four parties in favor of amendment won enough seats in the July 10 Upper House election to forge the two-thirds majority needed in the chamber to initiate such momentous change.

It was a dream that slain former Prime Minister Shinzo Abe had desperately hoped to achieve during his nearly nine years in power. He was gunned down while campaigning July 8 on behalf of a ruling Liberal Democratic Party candidate.

The LDP and its junior coalition partner Komeito were on course to win at least a combined 70 of the 125 seats contested, ensuring a majority for the two parties.

Nippon Ishin (Japan Innovation Party) looked set to double the number of seats it held that were contested. And along with the Democratic Party for the People, the four parties were narrowing in on at least 82 seats.

Combined with the uncontested 84 seats held by the four parties, the bloc in favor of amending the Constitution will reach the 166 seats that represent a two-thirds majority.

This will give Prime Minister Fumio Kishida--with a stable political base assured--the momentum to forge ahead with key policy issues.

These include dealing with a recent surge in consumer prices as well as a rebound in new COVID-19 cases.

However, Abe’s death just two days before the election leaves a huge political vacuum that could unsettle the balance which supported the Kishida administration.

The Kishida administration will also have to deal with other issues that the LDP did not actively focus on during the election campaign.

One would be doubling defense spending over the next five years. This could be hard to achieve in light of harsh fiscal realities and costly social security programs for an increasingly aging population.

Other factors confronting the administration involve making a decision on whether to continue with Abe’s much-vaunted “Abenomics” package of economic measures that included a loose monetary policy as well as resuming operations of nuclear plants due to surging prices of imported petroleum in the aftermath of Russia’s invasion of Ukraine.

An immediate task facing Kishida is a Cabinet reshuffle as two ministers did not seek re-election.

With the main opposition Constitutional Democratic Party of Japan falling well short of the number of seats it had that were contested, Kenta Izumi, the party head, may well face calls to take political responsibility and step down.

He took over last year after Yukio Edano bowed out to take responsibility for the party’s woeful showing in the Lower House election.

While Nippon Ishin again fared well in this election, Ichiro Matsui, the party leader, has already indicated he will retire from politics next spring. This means a new leader may be in the offing if he decides to resign before then.

It remained uncertain whether the Japanese Communist Party would retain the six seats it held that were contested.