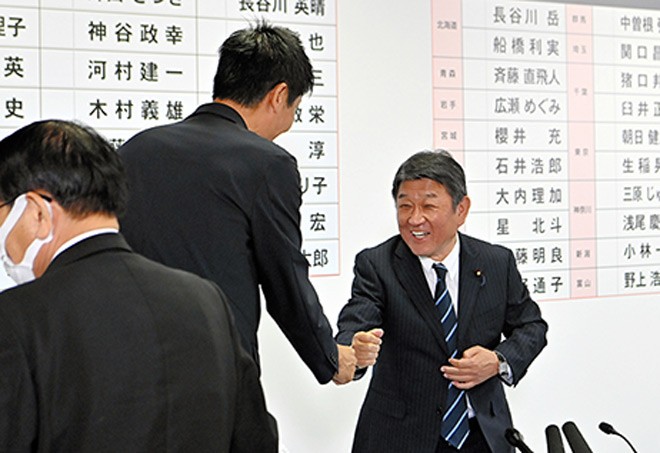 Toshimitsu Motegi, the LDP secretary-general, right, on the night of July 10 in the LDP headquarters in Tokyo, shakes hands with Kentaro Asahi, the party’s candidate in the Tokyo electoral district in the Upper House election held that day, after his victory was declared. (Yosuke Fukudome)

While maintaining fairly solid support ratings, Kishida did not do anything “radical” that could have jeopardized his party’s chances in the July 10 poll.

His style of governance is described as “safe driving,” and he has boasted about his “ability to listen” and his “tolerant politics.”

“The prime minister maintained support by doing nothing,” a Lower House member said.

A Cabinet member said about the July 10 election: “Opposition parties didn’t do enough. There were lots of things (about the government) that I would have criticized if I had been a member of an opposition party.”

Opposition parties did, in fact, criticize Kishida and his government over the rising consumer prices and the yen’s depreciation. But that was not enough to hurt the candidates of the ruling coalition.

For example, he put off submitting legislation to revise the Immigration Control and Refugee Recognition Law that would have toughened policies on granting refugee status to asylum seekers.

The LDP won 63 seats in the election, more than half of the number contested. The figure was far more than Kishida’s stated goal of winning 55 seats.

“We are seeing results that the ruling parties, including the LDP, are very grateful for,” Kishida said on a TV program aired by Japan Broadcasting Corp. (NHK) on the night of July 10. “We have heard harsh criticism toward us during the campaign. We would like to move ahead with our politics, accepting such criticism as something to motivate us and feeling a huge responsibility on our shoulders.”

From the start of the election campaign, the ruling parties were ahead in most opinion polls.

The approval ratings for the Kishida Cabinet were strong even before the campaign started.

In October 2021, just after the Kishida administration started, the approval rating was 45 percent in an Asahi Shimbun survey.

The rating climbed and reached its highest level of 59 percent in May, according to The Asahi Shimbun’s surveys. These high approval ratings certainly helped the LDP candidates in the election.

Fragmentation among the opposition parties also improved the chances of the ruling party’s candidates.

In this election, opposition parties backed a unified candidate in only 11 of the 32 single-seat districts.

In the two previous Upper House elections, opposition parties, including the main opposition Constitutional Democratic Party of Japan, unified candidates in all such districts.

The LDP got on closer terms with Rengo, the nation’s largest labor organization, ahead of the election.

“We will actively be engaged in policy discussions with Rengo and other friendly trade unions,” the LDP’s activities policies finalized in March said.

Since then, the LDP has gradually eroded the support base for the opposition parties.

Rengo is a support organization of both the CDP and the opposition Democratic Party for the People.

Rengo’s acceptance was partly intended to gain more votes for either of the two parties in the proportional representation constituency of the election.

If both parties fielded candidates in single-seat contests, more votes would be cast for either of them in the proportional representation constituency than if a unified candidate ran, according to Rengo’s reasoning.

However, a senior LDP official said, “We won this election because we successfully divided support for the opposition parties.”