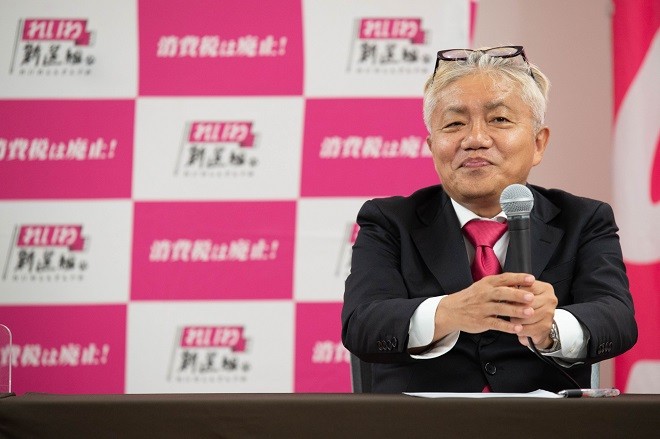 Comedian Suidobashi-Hakase of Reiwa Shinsengumi speaks at a news conference on July 11. He is one of the celebrities who won a seat in the Upper House election. (Hikaru Yokoyama)

A former pop icon and retired athletes are among the July 10 Upper House election winners.

Collectively referred to as "tarento" (celebrities or well-known media personalities), these people have no experience in administration and politics.

What, then, is the significance of their becoming Diet members?

I first confronted this question as a reporter 12 years ago, when popular actor Daijiro Harada, now 78, ran for the Upper House in the Yamaguchi Prefecture electoral district.

This was a dramatic turn of events, masterminded by Ichiro Ozawa, then secretary-general of the ruling Democratic Party of Japan. I was on Harada's campaign trail for two months.

Was it not obvious to him then that he was just being used as the DPJ's "poster boy" and vote-getter?

During the recent Upper House election campaign, I visited Harada and asked him about that.

"I didn't even give a fig for that criticism," he replied. He decided to run, he said, to pursue the democratic ideal of "helping the vulnerable and underprivileged."

"The campaign exposed me to the realities of human nature and the wide 'ocean' beyond," Harada continued. "For an actor like me, the experience was invaluable."

He was optimistic about the outcome. However, all his illusions were shattered on the eve of election day.

"All of a sudden, I felt an icy chill in the audiences' reactions," he recalled.

As a professional actor, he was keenly attuned to the reactions of audiences.

"Voters probably make up their minds around the day before election day. I knew I'd already lost."

It was actually a rout, and Harada returned to acting.

In preparation for my interview with Harada, I read "Hyoden Miyata Teru" (A critical biography of Teru Miyata), a work Toshiro Furuya recently published.

The book depicts the hardships of the iconic "tarento giin" (celebrity lawmaker) Miyata, a former NHK (Japan Broadcasting Corp.) employee-entertainer who ran for the Upper House in 1974 from the now-defunct "nationwide district" and won.

Furuya notes that NHK chose Miyata as a "human sacrifice" in compliance with the "strong request" of then-Prime Minister Kakuei Tanaka.

Miyata died of an illness at age 68, midway into his third term with the Upper House.

All of this year's rookie "celebrity lawmakers" must be aware that it was their fame that earned them the endorsement from political parties.

Voters are closely watching their performances on the political stage and to see for what they will be remembered.