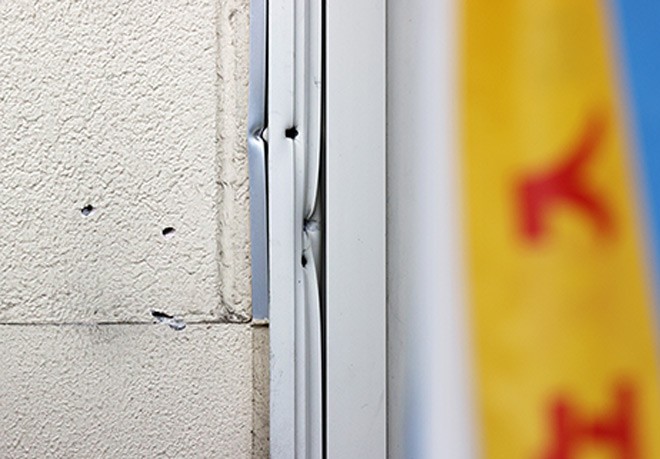 NARA--Police believe that holes found in the outer walls of a religious group's facility here came from bullets fired from the same gun used to shoot and kill former Prime Minister Shinzo Abe.

Tetsuya Yamagami, 41, the suspected assassin, has told investigators that he test-fired a weapon at the building on July 7, the day before Abe was shot and killed while delivering a campaign speech in Nara.

The facility is associated with the Family Federation for World Peace and Unification, a religious group known as the Unification Church.

Nara prefectural police inspected the facility on July 11 and discovered six holes in a 50-centimeter square area near a first-floor door.

Some of the holes had a metallic piece embedded inside, which were apparently from a homemade projectile.

Police said they were likely shot from the same gun used in the shooting of Abe.

On the metallic portion of the door, police found a mark that appeared to be made when a bullet pierced it.

The facility is a four-story building facing the street, located in the city of Nara’s Sanjo-oji district.

According to a nearby security company, a security camera captured a vehicle similar to Yamagami’s black mini-vehicle, which police seized, passing from north to south at around 3:58 a.m. on July 7.

Numerous residents said they heard a loud noise about the same time.

Yamagami has told investigators that his mother is a member of the Unification Church, and he has harbored a grudge toward the group. He reportedly targeted Abe because he thought he had close connections to the religious group.

Police on July 12 dispatched about 10 investigators to inspect the facility.

Satoshi Ninoyu, head of the National Public Safety Commission, said at a news conference that day that there were flaws in the security protection afforded to Abe.

He said he has instructed the National Police Agency to examine the security arrangements.

The agency is expected to launch a team to investigate and examine the matter and sort out the problems.