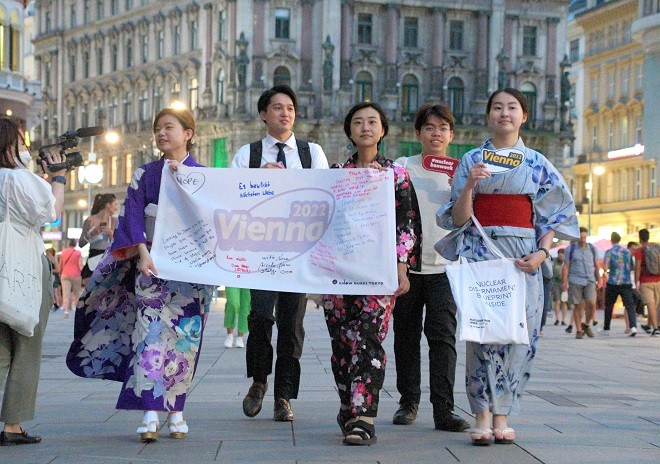 College students from Japan march in Vienna on June 20 with a banner to mark the first meeting of states parties to the Treaty on the Prohibition of Nuclear Weapons. (Tabito Fukutomi)

Takahashi stressed the significance of young people’s commitment to the global anti-nuclear movement in front of hundreds of attendees during a meeting organized by the International Campaign to Abolish Nuclear Weapons (ICAN) on June 19.

“We will not be able to connect the message (of atomic bomb survivors) to the world and to the future” unless taking action now, said Takahashi, 21, who lives in Yokohama.

The event was held by the international nongovernmental organization prior to the gathering of states parties to the Treaty on the Prohibition of Nuclear Weapons (TPNW) that continued through June 23 in Vienna.

Nongovernmental group members from various nations were in attendance there.

Takahashi hails from Fukuyama, Hiroshima Prefecture. As a junior high school student, he heard Sunao Tsuboi, chair of the Hiroshima Prefectural Confederation of A-Bomb Sufferers Organizations, talk about what he experienced when the atomic bomb detonated on Aug. 6, 1945, over Hiroshima.

Takahashi then worked out a leaflet featuring Tsuboi’s story.

He founded a group of young individuals working toward nuclear abolition in May last year. His organization, called Know Nukes Tokyo, has been involved in such activities as questioning lawmakers about their opinions over the TPNW.

Takahashi had long kept in touch with Tsuboi before the renowned activist died at age 96 in October 2021.

Takahashi in May this year visited a bridge in Hiroshima near the location where Tsuboi saw the atomic bomb dropped. He vowed to Tsuboi, who always wanted nuclear weapons to be abolished, that he would go to Vienna.

YOUNG JAPANESE MADE THEIR MARK IN VIENNA

Many young people from Japan worked prominently in the Austrian capital, taking a range of actions from delivering speeches before national representatives to sharing stories of hibakusha in Hiroshima and Nagasaki in English.

What drove them in part to action is Tokyo’s decision not to participate in the TPNW meeting, even though the country was victimized by nuclear bombings.

A day before the session opened on June 21, Takahashi spoke to Yoshizane Ishii, director of the Japanese Foreign Ministry’s Arms Control and Disarmament Division, who was attending another international meeting in Vienna.

Takahashi told Ishii that an online petition had collected more than 20,000 signatures calling on Tokyo to participate, and he demanded the Japanese government “join the meeting of states parties to the TPNW.”

Arguing back, Ishii said, “The government’s stance is that the TPNW should represent the final exit to a nuclear-free world. We will be making efforts to urge nuclear weapon-possessing nations to engage in nuclear disarmament.”

Takahashi patiently took issue with the reply, asking Ishii if “taking part as an observer is among your envisioned efforts.”

While young individuals’ anti-nuclear activities are often described as simply “passing down hibakusha’s wishes for posterity,” this is not the only factor motivating Takahashi to swing into action.

Takahashi said nuclear abolition is an “issue that can affect our own future.”

During his speech, Takahashi emphasized that he “will never give up our course, we can change our world.”

On the second day of the TPNW meeting on June 22, Kako Okuno, 20, a freshman at Shiraume Gakuen College in Tokyo, spoke as a youth representative of the International Committee of the Red Cross (ICRC).

“Nuclear weapons could potentially destroy our planet, affecting a large number of people,” said Okuno, drawing huge applause from attendees from states around the world at the site. “We must not leave the negative legacy of nuclear weapons and the climate crisis to future generations.”

Okuno, a native of Hiroshima, felt sympathy for Swedish environmental activist Greta Thunberg and began devoting herself to calling for countermeasures against climate changes.

As Okuno studied to become a child care worker, she started considering nuclear weapons as a problem given that their use can have a grave impact on the environment.

“I want to protect happy daily lives with people around the world,” she said, looking back on those days. “I now am standing on the starting line after a long time.”

A total of 16 individuals between their teens and 30s left Japan for Vienna to coincide with the TPNW session.

Suzuka Nakamura, 22, a college student whose grandmother was exposed to radiation in Nagasaki on Aug. 9, 1945, gave a speech at an international meeting a day before the TPNW gathering’s opening. She shared her feelings in a kimono she borrowed from a female hibakusha.

Developments in Vienna were uploaded on social media by younger activists, while their achievements were reported in Japan through the internet as well.

U.N. Under-Secretary-General Izumi Nakamitsu, a top official responsible for disarmament affairs, praised their endeavors during a news conference on June 22.

“The most impressive in connection with the meeting this time is young people’s involvement,” she said. “I was deeply moved and impressed by their energy.”

Masashi Ieshima, 80, who lived through the Hiroshima atomic bombing and currently resides in Tokyo, shared his story linked to the catastrophe on five occasions in Vienna.

At every session, Ieshima concluded his speech with the same words: “Circumstances have been worsening over nuclear weaponry, but the younger generation's commitment offers a beacon of hope. Whether a future without nuclear weapons can be realized depends on you guys.”