Academics split over whether state funeral for Abe is necessary 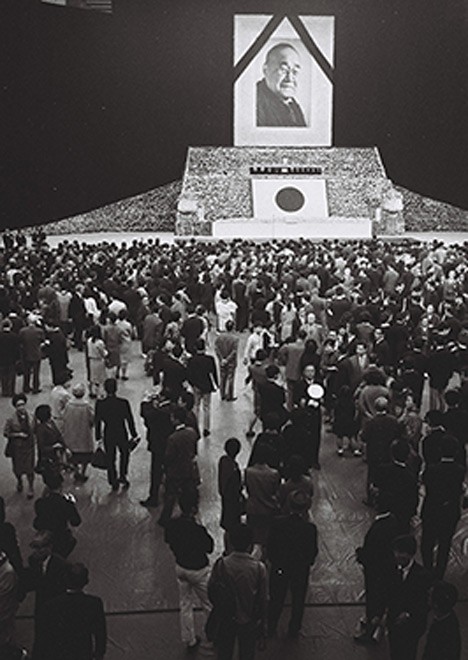 The state funeral for Shigeru Yoshida, a former prime minister, was held on Oct. 31, 1967, at the Nippon Budokan hall in Tokyo. (Asahi Shimbun file photo)

Experts were divided on the plan to hold a state funeral this autumn for former Prime Minister Shinzo Abe, which would be the first for a former prime minister in more than half a century.

One academic expressed surprise at the suddenness of the announcement made less than a week after Abe, 67, was gunned down in Nara while giving a campaign speech on July 8.

“The government likely wanted to honor him as an outstanding politician who stood at a level comparable to former Prime Minister Shigeru Yoshida,” said Takeshi Hara, a professor of the history of Japanese political thought at the Open University of Japan.

Yoshida is the only former prime minister after World War II to be accorded a state funeral, which was held in 1967.

Hara pointed out that Yoshida died at 89, and the public generally acknowledged that he established the foundation for postwar Japan.

“But Abe’s death was just too sudden,” Hara said. “I feel the intent to try to unilaterally establish the assessment of him as ‘an outstanding politician who met a violent death before realizing his goal’ even before an evaluation was made of the good and bad points of his administration, including various facts that have not yet been disclosed.”

Chihiro Okawa, a political science professor at Kanagawa University, said, “While there was persistent criticism about Abe’s political stance and policies that some people could not support, he did fulfill his responsibility as the leader of a long-running administration so overall public approval for a state funeral will likely be gained if one thinks about how he established Japan’s international standing.”

But Okawa added that a process is needed to thoroughly explain to the public the legal basis for holding such a state funeral.

While there is no law defining a state funeral, government officials said the government would cover all expenses and that Nippon Budokan in Tokyo was being considered as a possible venue.

Naoto Nonaka, a professor of comparative politics at Gakushuin University, said while he was dissatisfied at the lack of diplomatic achievements by Abe, he wasn't completely opposed to according him the honor.

“Regardless of the contents of what he achieved, it is a fact that he was the longest-serving prime minister, so it might be acceptable to hold a state funeral to pay full respect to him,” Nonaka said.

Koichi Yokota, professor emeritus of constitutional law at Kyushu University, said because Abe was a politician whose evaluation was not universally agreed upon, there is no need to hold a state funeral that could further divide the nation.

Meanwhile, politicians of the ruling Liberal Democratic Party were generally satisfied at the decision to hold a state funeral for Abe, given that some had called for such a ceremony.

But one veteran LDP politician said the government decision should have been made when the situation had become calmer.

“(Prime Minister Fumio) Kishida likely gave consideration to the Abe faction and conservative elements within the party,” the politician said.

Kenta Izumi, head of the main opposition Constitutional Democratic Party of Japan, issued a statement in which he said he wanted to calmly observe developments while praying for the fallen politician.