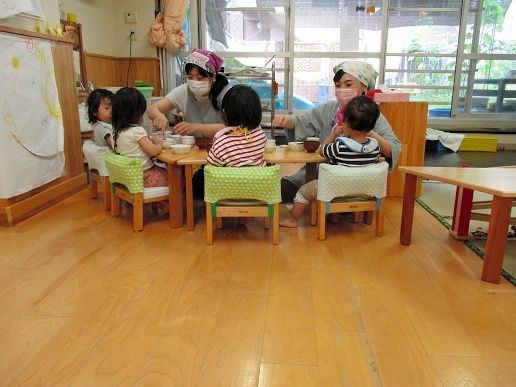 Only four 1-year-old children, seen eating a meal together on July 12, are enrolled at a central government-authorized day care center in Tokyo’s Suginami Ward, which has a maximum capacity of 10 1-year-olds. (Provided by Eisuke Sugiura)

Fewer than half as many children were on central government-authorized nursery school and day care facility waiting lists in 60 municipalities this past spring compared to last year, an Asahi Shimbun survey has shown.

The drop is likely partly attributable to the falling birthrate and partly to a pullback in demand for putting children into child care facilities during the novel coronavirus pandemic.

The survey was conducted in 62 municipalities, including the ordinance-designated major cities of Japan and the 23 wards of Tokyo. A total of 782 children were on waiting lists in spring 2022 in the 60 municipalities that responded, down from 2,013 a year earlier.

A similar survey conducted by The Asahi Shimbun last year showed the number of children on waiting lists had significantly dropped from about 5,000 in spring 2020 to only about 1,700 in spring 2021.

Though the two studies did not cover an identical set of municipalities, this year’s survey shows the downward trend has continued.

It should be noted, however, that the number of the so-called “hidden children on waiting lists" remained high, at 41,235, during the latest survey, suggesting there is a need for more carefully designed day care policy measures.

"Hidden children on waiting lists" refers to children who are technically not on waiting lists but still need a spot at a child care facility, such as when their parents must extend their child care leave because they could not get a slot in an authorized day care center they had wanted.

Apart from the ordinance-designated cities and the Tokyo wards, the latest survey also covered 19 municipalities that had 50 or more children on waiting lists as of April last year.

An anonymous blog post titled “Didn’t get a slot in day care. Drop dead, Japan!!!” drew public attention to the issue of children on waiting lists in 2016.

Welfare ministry figures show the total number of similar children across Japan dropped from 23,553 in that year to only 5,634 in April last year, a record low since statistics became available.

Some day care centers, in the meantime, are becoming under-enrolled, and The Asahi Shimbun survey showed day care officials had told municipal government workers about their anxiety over finances.

“We worry whether we will be able to stay afloat because we are receiving less money to cover our operating expenses, as fewer children are being enrolled with us,” municipal government workers in Sapporo and Kawasaki reported being told.

“The cuts in operating expense grants are weighing heavily on us; we can't just fire our child care workers,” Tokyo’s Kita Ward government reported a day care official as saying.

Day care centers should maintain a surplus capacity so parents can get a slot there any time of the year, meaning they may give birth to a baby and then return to work whenever they want--not just at the beginning of the new school year in April.

A surplus capacity is also needed in the event that an urgent need for day care arises, such as when a parent develops anxiety over child care or has to be hospitalized.

The anxiety over finances arises partly because central and local government grants to cover operating expenses are not paid in accordance with the maximum capacity for children, but in line with the actual number of children enrolled.

“The demand for day care has shrunk because of the falling birthrates and the loss of jobs under the COVID-19 pandemic,” said Shintaro Yamaguchi, a professor of economics with the University of Tokyo.

“Day care centers are playing major roles as contributors to the development of children and to households raising small children,” Yamaguchi added. “Day care resources, such as child care workers and nursery schools, should not be so readily reduced just because there are fewer children on waiting lists this year.”

(This article was written by Natsumi Nakai, Shiori Tabuchi and Haruna Ishikawa.)