A man who appears to be Tetsuya Yamagami is seen walking in Okayama on July 7, where former Prime Minister Shinzo Abe gave a stump speech for the Upper House election. Yamagami was arrested in the shooting death of Abe in Nara the following day while the politician was giving a campaign speech. (Provided by the Okayama Kaminocho commercial cooperative association) 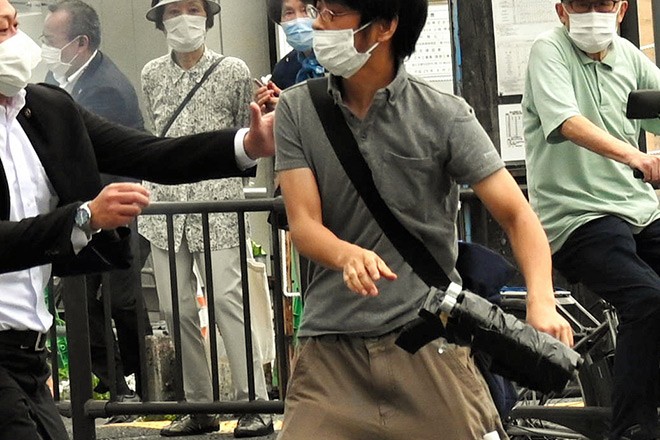 Tetsuya Yamagami, the suspected killer of former Prime Minister Shinzo Abe, immediately before he was overpowered by security personnel in Nara on July 8. (Mami Ueda)

NARA--The suspect in the slaying of Shinzo Abe fired his first shot from about 8 meters away, and within less than three seconds moved to roughly 5 meters behind the former prime minister to squeeze off a second fatal round, investigative sources said.

Tetsuya Yamagami showed no hesitancy during the attack, indicating his determination to kill Abe, according to the sources.

On the morning of the July 8 shooting, Abe stood in a 50-square-meter area surrounded by an 80-centimeter-tall guardrail near Kitentsu Railway Co.’s Yamato-Saidaiji Station in this city.

Clutching a microphone, he was there to deliver a speech for a candidate running in the July 10 Upper House election.

Abe, 67, was with the candidate and protected by security personnel.

Around 11:30 a.m., Yamagami, 41, was seen with other onlookers on a sidewalk across the road, according to the sources.

The distance at the time between Abe and Yamagami was about 15 meters, if measured in a straight line.

Yamagami then walked across the road, approaching Abe from behind.

In the course of doing so, he pulled out a handmade gun from his shoulder bag and fired a first shot when he was about 8 meters from Abe.

As people nearby cringed at the sound of gunfire, Yamagami kept moving, going about five steps forward, while a plume of white smoke emerged from the barrel of the weapon.

He got off a second shot 2.7 seconds after the first one, when he was about 5 meters behind Abe.

Abe, who appeared to turn around in the direction of the first shot, stooped and fell to the ground.

His first shot apparently missed, so he moved forward to get closer, seemingly without hesitation, according to the sources.

Police are treating the slaying as premeditated murder, according to the sources, as Yamagami told investigators he made the gun himself and tested it repeatedly. Police later found a number of homemade guns in his home.