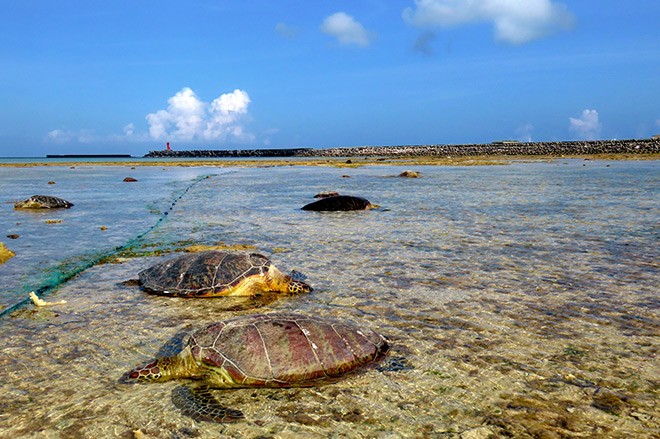 Sea turtles are found too weakened to move due to injuries apparently inflicted by local fishermen in Kumejima island, Okinawa Prefecture, on July 14. (Provided by the Sea Turtle Museum of Kumejima)

More than 30 sea turtles were found with stab wounds to their necks and flippers and unable to move, apparently injured while fishermen removed them from fishing nets.

The turtles were discovered on Kumejima island beaches, located about 100 kilometers to the west of Okinawa’s main island, on July 14.

Reported by islanders, staff of the Sea Turtle Museum of Kumejima rushed to the shoaling beach on the eastern part of the island, where most of the turtles were lying motionless.

The beach, with a sprawling seaweed bed, is renowned for its green turtles. They go there to feed. The species is listed as threatened with extinction by the Environment Ministry.

“Many of the turtles appeared dead. I have never seen anything like this before,” said a museum employee. “It is extremely difficult to process this.”

According to islanders familiar with the local practice of gillnet fishing, fishermen sometimes resort to brutal methods to free turtles that become entangled in their nets.

Police are investigating the case as a suspected instance of cruelty to animals.

(This article was written by Shogo Mitsuzumi and Mika Kuniyoshi.)