EDITORIAL: Stating case for Japan to wean itself off from Russian energy 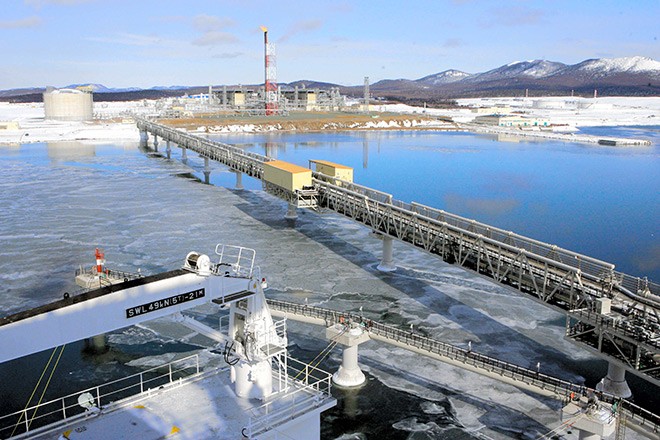 An LNG terminal, top, and a pipeline stretching to the LNG carrier Grand Aniva in Sakhalin, Russia, in 2009 (Asahi Shimbun file photo)

Russia has moved to take charge of the Sakhalin-2 natural gas project, which leaves investments made by Japanese companies at the mercy of economic fallout from the war in Ukraine.

As if forgetting its act of aggression, Moscow appears to be trying to hit back against economic sanctions imposed by the international community. We should not be fazed by President Vladimir Putin’s outrageous move.

While claiming its legal rights and interests related to the project, Japan should step up well-coordinated public and private efforts to prepare for a possible stoppage of gas imports from Russia.

Putin recently signed a decree to transfer the assets of the company operating Sakhalin-2 to a newly established entity. The existing shareholders, including Japanese trading companies, need to reapply to the Russian government to regain their current interests in the project in the form of stakes in the new firm. The Russian government will then decide whether to allow them to retain a stake.

As a reason for taking the step, Moscow cited a breach of obligations under the contract. But it has offered no specific grounds for the allegation.

As such, it could constitute a violation of the investment protection agreement between Japan and Russia. Any move to unjustifiably seize the assets and interests of businesses based on a contract is totally unacceptable.

Russia should realize its decision threatens to destroy its credibility in the economic arena as well.

Japan depends on Russia for close to 10 percent of its imports of liquefied natural gas (LNG) as most of its Russian gas imports come from Sakhalin-2.

A sharp decline in or total stoppage of the LNG supply from the project could cause a serious disruption in domestic gas and power supplies. It would be by no means easy to find an alternative source to compensate for the loss and very costly to purchase gas in the international market where prices have soared.

Given the circumstances, it is understandable that the Japanese government and the companies involved are trying to protect their legitimate rights and interests. But they need to brace for attempts by Russia to gain the upper hand in the negotiations and not allow it carte blanche to set the terms.

Japanese shareholders must avoid allowing Russia new benefits that could undermine the effectiveness of the economic sanctions. Japan should not play into the hands of Russia as it tries to drive a wedge in the unified stand taken by Japan, the United States and Europe in punishing Moscow for its Feb. 24 invasion of Ukraine.

At the same time, it is urgent for Japan to secure stable gas supplies for this winter when domestic gas consumption will spike and the electricity supply will become tight. In addition to seeking out alternative sources, it is also imperative to facilitate interchanges of LNG between domestic suppliers and expand storage capacity at home. Moreover, steps must also be taken to cut consumption and develop specific contingency plans to deal with a possible crunch.

In retrospect, Russia’s move to exert pressure on Japan was pretty predictable. It had already reduced gas supplies to Europe. The Japanese government has repeatedly said Japan will not withdraw from Sakhalin-2. But it seems the government was overly optimistic in this regard.

In addition to the need to enhance the effectiveness of economic sanctions against Russia, the risk of relying on the country for vital resources underscored by the latest development only reinforces the case for reducing dependence on Russian energy.

International cooperation is crucial for slashing gas imports from Russia while avoiding economic damage and confusion as much as possible.

Japan needs to work with other gas producers, including the United States and European nations, which are also struggling to secure gas supplies. Tokyo should seek expanded cooperation with these countries for effective joint efforts to overcome the crisis.