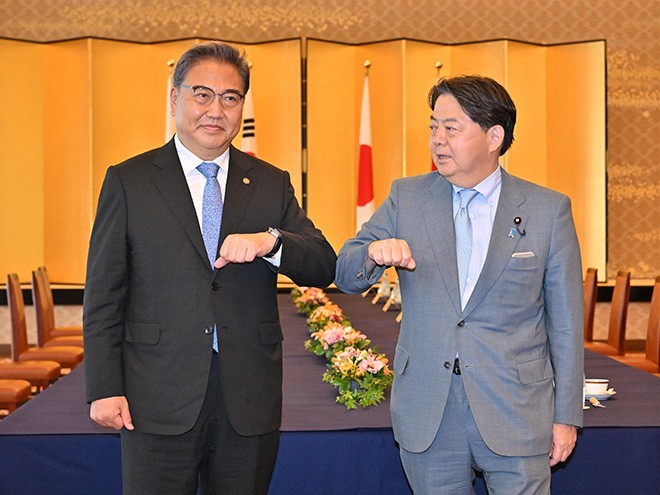 Japan and South Korea held their first official meeting of foreign ministers since South Korean President Yoon Suk-yeol took office in May but made almost no progress on the pressing issue of wartime labor that sent bilateral relations into a tailspin.

However, Foreign Minister Yoshimasa Hayashi and his South Korean counterpart, Park Jin, agreed at the July 18 meeting in Tokyo to make a determined effort to reach a favorable resolution in relation to lawsuits brought by wartime Korean laborers against Japanese companies.

South Korea’s Supreme Court in 2018 issued a series of rulings that angered Japan ordering the companies to pay compensation. Legal proceedings since then have moved toward converting assets of the companies into cash for distribution to the former laborers.

Japanese officials have said that would be the worst possible outcome, and South Korea has offered little in the way of specific measures to avoid that from happening.

Hayashi attended Yoon’s inauguration ceremony in Seoul on May 10 as the special envoy of Prime Minister Fumio Kishida.

He met with Park the previous day, before he was even formally approved as foreign minister. The two agreed to work quickly to improve bilateral ties.

But the first formal meeting between Hayashi and Park came more than two months later due to concerns in Japan about a South Korean vessel conducting an oceanographic study in waters near the disputed Takeshima islets, which South Korean claims and calls Dokdo.

That pushed back the first formal meeting between the two foreign ministers until after the July 10 Upper House election. The slaying of former Prime Minister Shinzo Abe while campaigning two days before election day threw up another hurdle in the mutual quest to put bilateral ties back on a strong neighborly footing.

There were concerns that if the Kishida administration was seen as taking a much more conciliatory stance toward Seoul, conservative elements within the ruling Liberal Democratic Party could begin openly voicing opposition to such moves.

Abe was able to control those elements because of his political stature, but his death leaves a vacuum that could be taken advantage of by those who hold strong views about historical issues related to Japan and South Korea.

But a high-ranking South Korean Foreign Ministry official said the decision was made to have Park visit Tokyo because Seoul did not want to disrupt the growing sense of rapprochement since Yoon took over as president.

The Yoon administration is also striving to win points on the diplomatic front because of plummeting support ratings caused partly by disgruntlement over a recent surge in consumer prices triggered by Russia’s war against Ukraine.

According to South Korean Foreign Ministry sources, Park presented a detailed explanation to Hayashi about developments in a new conference set up by the government but also involving the private sector that began in early July to seek a resolution to the wartime laborer issue.

Some South Korean plaintiffs in the lawsuits have refused to take part in the conference because they perceive it as an attempt to reach a resolution in line with requests made by Tokyo.

An official close to Yoon described the difficulty in dealing with the issue.

“Resolution will be difficult without some sort of compromise toward Japan,” the official said. “Taking domestic circumstances into account, we cannot unilaterally offer concessions.”

(This article was written by Yuichi Nobira and Takuya Suzuki.)