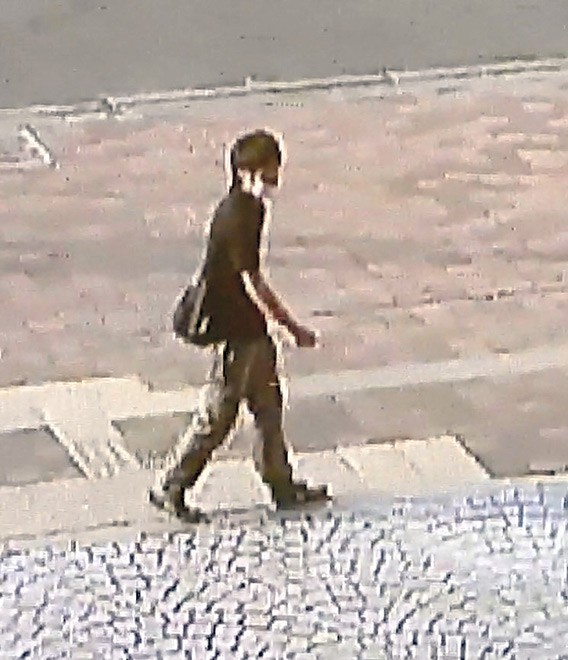 Security camera footage captures a man believed to be Tetsuya Yamagami walking in Okayama’s Kita Ward around 5:40 p.m. on July 7. Former Prime Minister Shinzo Abe was scheduled to deliver a speech at a venue about 250 meters away. (Provided by the Okayama-Kaminocho merchant cooperative association)

Nara prefectural police believe the suspect, Tetsuya Yamagami, blended a mixture of chemical compounds by trial and error to create the bang he needed for the gun cartridges he used in his homemade guns. The mixtures were stored in 20 or so containers separated from ones that were usable from those that weren't.

Yamagami, 41, told investigators he kept the unusable materials because they were difficult to dispose of, the sources said.

He used different types of containers depending on the explosive force of the homemade gunpowder, the sources added.

Police also seized an electronic scale, a blender, industrial tools and at least five handmade guns as well as receipts for products Yamagami purchased online, such as empty cartridge cases and plastic containers for ammunition.

They also confiscated several trays wrapped in aluminum foil from his vehicle.

Yamagami told investigators he learned how to make weapons and explosives by watching YouTube channels.

He added that he used the industrial tools to make the guns and cartridges and the trays to dry the gunpowder.

Yamagami experimented both at home and in a mini-vehicle he owns.

He said he took every effort to ensure no harm came to others “until I had things the way I wanted,” adding that he made loads of prototypes.

Yamagami said he learned about Abe’s scheduled July 7 visit to Okayama on the internet four days before it occurred, sources said.

“I brought a gun to (Okayama),” the sources quoted him as saying.

Abe was gunned down in Nara while giving a campaign speech the following day.

Based on Yamagami’s smartphone’s browsing history, the suspect checked Abe’s schedule several times after learning about the visit on the internet on July 3, and purchased a one-way Shinkansen ticket to Okayama at JR Nara Station on the evening of July 6, sources said.

Around 4 a.m. on July 7, gunshots rang out at a building in Nara where a group with ties to the Unification Church is located.

Police are certain Yamagami was responsible as a security camera at a convenience store about 1 kilometer from the building captured him soon afterward. Yamagami also blames the Unification Church for ruining his life because his mother donated all her money to the group.

He said he shot Abe because he believed the politician had ties to the group.

Yamagami apparently bought a soft drink at the store.

About 30 minutes after that, he purchased a can of beer at another convenience store, sources said.

Abe joined a campaign rally that was held from 7 p.m. at a hall in Okayama on July 7.

Police said Yamagami traveled from Nara to Okayama by Shinkansen that afternoon.

Prior to the start of Abe's speech, Yamagami dropped a letter in a mailbox located inside a convenience store near the venue.

The letter, which police seized July 17, was printed on A-4 size paper and the envelope bore the postmark Okayama Chuo. In it, Yamagama hinted that he intended to kill Abe.

Yamagami hid the handmade gun in a bag and went to a venue where Abe was delivering a speech.

But a reception counter at the venue where guests were required to check in prompted Yamagami to abandon his plan to attack Abe and he returned to Nara on the evening of July 7, police said.

At 11:32 a.m. on July 8, Yamagami shot Abe in front of Kintetsu Line’s Yamato-Saidaiji Station in Nara. He was standing about 5 meters behind Abe when he fired.

Yamagami was arrested on the spot and his case was then referred to prosecutors.