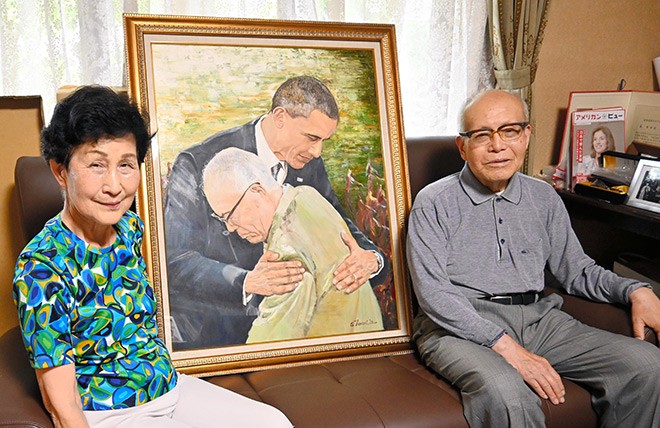 Mori, 85, discovered 12 American prisoners of war were killed in the U.S. atomic bombing of Hiroshima on Aug. 6, 1945, and sought out their family members, all at his own expense.

Obama touched on Mori’s longtime efforts in an address at the Hiroshima Peace Memorial Park during his historic visit to the city on May 27, 2016.

Mori had an opportunity to talk to Obama after the president’s address. But he found himself at a loss for words. Obama hugged him in silence.

“I was turning over in my mind how hard it had been to locate the bereaved family members,” Mori said as he recalled the poignant moment. “I really wanted to say something, but my mind went completely blank and I forgot everything.

“The president saw precisely how tears were welling in my eyes. He threw his long arms around my back and drew me closer to himself.”

The painting, titled “Kizashi” (A hopeful sign), was gifted to Mori by artist Tomomi Saida, who was inspired by the nationally televised scene.

The composition is based on a news photograph.

She sent off the painting to Mori in July 2016 in the hope the moment of the embrace would serve as a herald of peace.

“The embrace represented a historical moment that sent, even if momentarily, a sense of healing and an emotion of tears to all corners of Japan and the rest of the world,” said Saida, who lives in Kamiichi, Toyama Prefecture, and signs her works as by Hofu Saida.

Mori and his wife Kayoko, 79, were astonished when they opened the package that had arrived from Saida, a total stranger.

“I was overwhelmed by the compelling power that arose from this original painting in a way that it does not come across from a photograph,” Mori said. “I am really thankful.”

The painting has found a permanent home in a small private museum in the Ikachi district of Yanai, Yamaguchi Prefecture, where a U.S. B-24 bomber known as the Lonesome Lady crashed in 1945.

Six of its crew members were among the American POWs killed in the atomic bombing of Hiroshima.

Masanori Takenaga, who has helped Mori with his research, plans to convert his trailer into the Ikachi Lonesome Lady memorial museum this year.

Although Mori has cherished Saida’s gift, he decided it is most suitable to be displayed in Takenaga’s museum.

The facility will also exhibit remains of the bomber, films, DVDs and other items related to the crash. It was originally scheduled to open on July 28, the 77th anniversary of the crash.

“I am delighted to learn that Mori has taken good care of the painting,” said Saida, who took up painting after working as a radiologist for many years. “It is an honor that it will be shown to the public.”

Takenaga, 71, said he wants many people to see the painting.

“To me, the light above Obama looks like the dove, a symbol of peace,” said Takenaga, who runs a convenience store. “I want visitors to let their imagination run as they like.”

Saida’s painting is on display at the Yanai City Library through Aug. 31 before it is housed in the new museum.

In his address in Hiroshima, Obama referred to “the man who sought out families of Americans killed here because he believed their loss was equal to his own.”

Mori, who was listening in a visitor’s seat at the invitation of U.S. officials, realized that Obama, the first sitting U.S. president to visit Hiroshima, was talking about him.

“The president knew about the atomic-bombed U.S. servicemen,” he said.

Mori has sought out families of the American POWs and remained in touch with them out of a belief born from being a hibakusha that friend or foe is irrelevant.

Russia has threatened to unleash nuclear weapons in its war against Ukraine.

“The ravages of a nuclear war would affect people of all races and nationalities,” Mori said. “No war should be allowed to happen.”

(Kenta Maeda contributed to this article.)